The Dark Peak with Drew and Rebecca 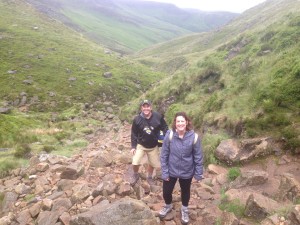 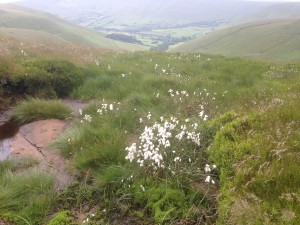 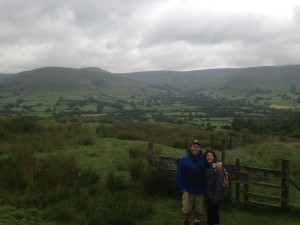 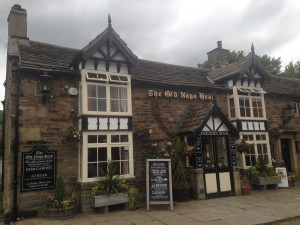 Drew and Rebecca contacted Come walk with me via the Tours by locals website and we arranged to meet them at “The Old Hall Inn” in Chinley. The guys were from Jacksonville in Florida and had spent an unseasonably warm week in London watching the tennis at Wimbledon and sightseeing in the city. The Dark Peak was sunny in the morning but it wasn’t long before we gave the guys a good dose of Peak District Summer rain which they dealt with with admirable good spirits!
We set off towards Mam Tor and climbed slowly up onto the unusually personless summit. As always the 360 degree views were breathtaking with the line of the Great Ridge stretching out before us and the Kinder Plateau (where we were headed) looking brooding and ominous in the distance. We dropped down to the crossroads at Hollins Cross and cut back diagonally across the lower slopes of Mam Tor and into Edale. Edale is an ancient village having been mentioned in the Domesday Book as Aidele and the village as it stands today consists of five “booths” or separate hamlets We passed through the quaint cottages and into Grindsbrook Clough where the first shower greeted us. The Heather was starting to bloom and the first of this year’s Bilberries were on the bushes as we made our way up the scrambly section to the top of the clough and the plateau proper. We followed the edges along to the rocky formations known as the Woolpacks where we stopped for lunch with a view of the valley below and Rushup Edge in the distance.
Our way off Kinder was via Jacob’s Ladder, a path allegedly named for a wily old farmer who took the steep short cut in order to gain himself time enough to smoke a pipe whilst waiting for his animals to join him. We followed the knee crunching descent onto the Pennine Way and then made our way back to Edale where we ducked out of the rain and into the welcoming embrace of “The Old Nag’s Head”. The rain eventually eased off and we made the last slow ascent back up Mam Tor and over the ridge to the waiting car.
We had a fantastic day out and Drew and Rebecca felt that they really got a sense of the area, apparently (and showing admirable optimism) the rain added to the authenticity of the day out! Tours by locals is a great resource that matches local guides with overseas travellers and I am hopeful that I will be able to work with many more of their customers in the future!