A circular walk from Hathersage to Bretton and Abney Grange 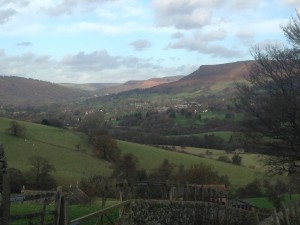 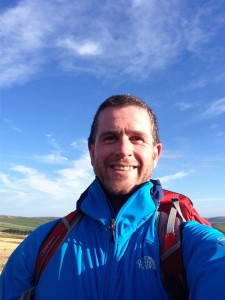 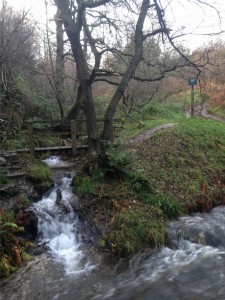 I’ve not spent as much time around Hathersage as I have in Edale and Hope so with a few spare days this week I thought I would head out that way and have an explore. I had to drop Mrs H off at Stockport station for the 6.30 train so I arrived in the village not long after 07.00am with a low mist giving the streetlights a ghostly glow. I set off in the direction of Leadmill Bridge in a steady drizzle that had failed to abate by the time I’d made my way across some muddy, boggy fields to Mount Pleasant farm. After putting up two Pheasants who exploded from the brush in front of me and almost gave me a heart attack, it was a short spell of walking up the narrow country lanes to the beautiful, and slightly eccentric, Highlow Hall. The Hall, which is reputed to be haunted, was owned by Robert Eyre one of an influential Derbyshire family who had originally come to England with William the Conqueror. With no sign of a ghost in site and under rapidly clearing skies, I slipped and slithered towards Highlow Brook where I saw a couple of young Roe Deer who made good a bounding escape through the woods.

Leaving the Deer behind I traced my way along the valley side until reaching the confluence of Bretton and Abney Clough before continuing past ruined barns and across long neglected stone walled fields and climbing up a muddy, leaf strewn path until I reached the hamlet of Nether Bretton. A few minutes further walking bought me out at “The Barrel Inn”, the highest pub in Derbyshire and one affording truly amazing views of the White Peak. The pub itself is a traditional coaching inn dating back to 1597 and is named for the barrel shaped caverns that can be found in the area as a result of mining for lead and fluorspar. Sadly, my early start meant it was a bit early for a pint and I left the lonely inn and proceeded along Hucklow Edge before dropping down into the jaw dropping Bretton Clough. The Clough is one of those places that you can’t believe isn’t more famous, a steep sided wooded cavern that gouges through the surrounding countryside. I crossed it and carried on up to the hamlet of Abney Grange which was once part of the estate of the Abbot of Welbeck. It’s a wild spot that feels very remote perched on the edge of Abney Moor which I crossed towards the old walled track of Brough Lane. With the wind blowing hard, views across towards Higger Tor and a beautiful blue sky with the odd whisp of cloud there were few better places to spend a contemplative twenty minutes with a brew!

My route curved along the contours below Shatton Moor which opened out a panorama of the Hope Valley and the Great Ridge from an unfamiliar angle. Whilst I accept that the cement works is a valuable local employer and brings much needed non-touristic money to the valley, from this angle you could see just what an eyesore it is…..nevertheless the views as a whole to Mam Tor and beyond were a joy. I passed Offerton Hall, which belonged to one of Eyre’s seven sons and then dropped down to the Stepping Stones over the Derwent which due to the recent wet weather were running as a weir. The last mile and a quarter followed the Derwent back to Leadmill Bridge and I spent most of it accompanied by a flock of curious Goldfinches who seemed intent of staying a small step ahead of me the whole way back.

Eleven miles done at a gentle pace in just under five hours and all before lunch. A different perspective of a favourite view and some new favourites discovered……and all before lunch! Sometimes it’s worth setting the alarm clock and trying somewhere new 🙂