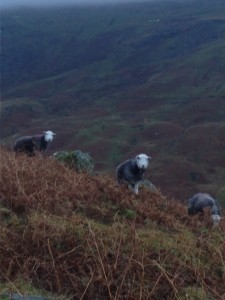 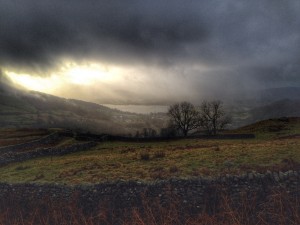 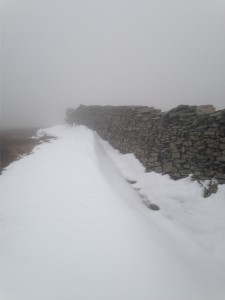 Ambleside is one of the great destinations of the Lake District, a town that sits at the end of Windermere, England’s longest lake, and has more Outdoor shops, tearooms and pubs than you can shake a stick at. It can sometimes be the victim of it’s own popularity and that can make people a little sniffy about it, as if it is somehow only for the casual daytripper and not the hardcore enthusiast. Whilst I can understand that it’s a shame as Ambleside has some of the best walking in the Lake District right on it’s doorstep. Whilst it may not have been as badly affected by the floods as Glenridding or Keswick, “The Waterhead Inn” remains closed and on my visit there was a distinct dearth of visitors either in the town itself or out on the fells.
The Fairfield Horseshoe is a Lakeland classic and one of my absolute favourites. I started out of the town itself passing by the substantial university campus before crossing Low Sweden Bridge.The Scandinavian sounding name is reputed to be derived from the old Norse word “svithinn” which meant “land cleared by burning” and the bridge is a fine example of the type of Packhorse bridge that can be found in the Lakes. Some work on a Hydro-electric scheme had scarred the lower slopes but I was soon climbing up above the splendid Scandale Beck and onto Low Pike. As I reached the low summit, the impressive views back towards Windermere disappeared as the clouds dropped low and the wind chill noticeably increased. The cloud stayed low depriving me of the views down towards Rydal Fell and as I made my way towards High Pike I came across an increasing number of patches of wet, slushy snow. I was also passed by a pack of hunting dogs who loomed in and out of the mist in a manner reminiscent of a Baskervillian hound, it was more than a little disconcerting on a number of occasions. I continued on through patches of snow and mud until I reached the flat, windblasted summit of Fairfield which at 873m is the highest point on the circuit. It was too cold to stay long and so I continued South onto and over Great Rigg and then following the Western ridge over Heron Pike until I emerged from the clouds to see Rydal Water and Loughrigg appearing in front of me. The path eventually dropped steeply down Nab Scar and emerges next to Rydal Mount where Wordsworth once lived. I took the path running past the Grade 2 listed Rydal Hall with it’s impressive formal gardens, before eventually emerging on the outskirts of Ambleside itself.
I was staying at the YHA which added an extra mile to my walk but occupies a great situation on the very edge of Windermere. Deciding I wanted to spread the love/money I spent a very pleasant evening in Ambleside sharing my trade between “The White Lion”, “The Unicorn” and “The Royal Oak”, my favourite of the three being “The Unicorn”.
Refreshed by a fried egg sandwich from “The Picnic Box” (who also provided my excellent Coronation chicken lunch effort) I set off the next morning up the wonderfully named “The Struggle”. Eventually I left the tarmac and climbed up through some very boggy, marshy ground into the cloud once more. After passing a fell runner and his dog I followed the line of the wall through thick cloud and over Snarker Pike until I eventually reached the top of Red Pike. It’s an impressive summit as the edge drops off sharply on the Northern side and there is a large tarn lying just below it. I followed the steep, twisting path that leads down the Eastern side until I emerged from the murk to see the welcoming lights of “The Kirkstone Pass Inn” where I sheltered from the inclemency over a pint of their own, very good beer! I decided to follow the road down instead of the often waterlogged path via High Grove and was back in Ambleside just after lunchtime and home ahead of the traffic! In spite of the unpleasant weather and the almost complete lack of views, this was two very satisfying days of walking and it was good to see Ambleside is still up and on it’s feet in spite of everything the Lake District has had thrown at it in the last month or so!