D of E with BXM Expeditions and St John’s, Marlborough 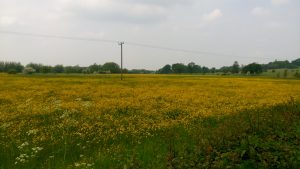 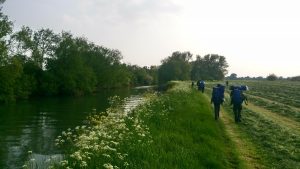 Another weekend and another D of E practice expedition. This one was in a part of the world new to me, the area where Gloucestershire, Oxfordshire and Wiltshire all come together. It’s a beautiful, rural part of the world with villages of honey coloured stone, thatched roofs, idyllic looking pubs and miles of farmland and woods. Winding it’s way through the heart of this area is the River Thames or Isis as it is also known in this part of the world. I arrived the night before and spent a very pleasant evening in “The Trout Inn” in Lechlade eating a pan fried trout and enjoying a pint of local beer. The campsite for the group was in the field behind the pub so I was well prepared.
As is usually the way with these expeditions the first day was spent walking with the groups and teaching them the basics of navigation that they’d require to progress on their assessed legs. We met the teams at Nightingale Wood and worked with them to trace a route to the pub at Lechlade. The students had to avoid main roads and use footpaths as often as possible and the two groups worked together to draw up a sensible route. We navigated our way through the countryside to Coleshill, home of a World War Two underground bunker and then with a few fits and starts continued onto the banks of the Thames where a tiring group wound their way along the meandering bank until they reached the campsite, where tents were erected, hot meals cooked and the evening sunshine enjoyed.
The next morning after another session of route planning and numerous pots of porridge, Groups 5 and 6 set off on their merry ways. With remote supervision the instructors create checkpoints and meet the group to ensure they are following the routes they have selected. It was a tough day for the guys, warm and close, and the additional stresses of being solely responsible for the route finding caused the odd bit of friction within the teams but eventually all 11 students made it as far as Badbury Hill, the finishing point of the expedition.
As always with D of E work, one of the real pleasures is seeing the acquisition of new skills, the moment when the scales fall away from the eyes and something starts to make sense. it’s also great to see groups start to work together and to see how initially quiet group members step forward to take responsibility for decisions. It was great to get to explore a new part of the world and a part I would definitely like to head back to.