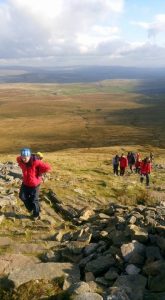 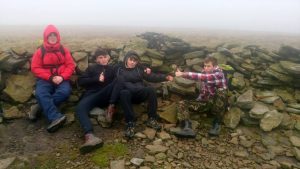 The National Citizen Service (NCS) is a government funded programme of positive activities for young people aged 16 and 17. The programme includes an adventurous activities residential and it was this that took me to Ingleborough Hall where CGO were working with two cohorts from the North East. Ingleborough Hall was built in the early nineteenth century for the wealthy Farrer family who used it as a shooting lodge, nowadays it operates as an outdoor education centre and has an impressive grounds packed full of beautiful Pheasants.
The programme for the young people included a caving session in some of the impressive Yorkshire limestone caves, a series of team building sessions and finally a mountain day on Ingleborough itself, my favourite of the Yorkshire 3 Peaks. Over the four days we experienced a variety of weather, ascent number one gave us views as far as the Irish sea from the summit, whilst on day four we could barely see the other group members at a distance of more than six foot. The route we took led us up from Clapham past Ingleborough Cave and then through the spectacular canyon of Trow Gill where on the Sunday we were lucky enough to see rock climbers testing themselves on the big wall. From there we headed up to Gaping Gill where Fell Beck disappears down a 98 metre pot hole into a cavern approximately the same volume as Yorkminster. After lunch at Gaping Gill, it was on up the steepening slopes of Little Ingleborough before following the ridge up on to the summit of Ingleborough itself. Reaching the summit was a real challenge for many of the young people and the ascent provided ample opportunities for supporting one another and working as a team on order to inspire one another to keep going.
I thoroughly enjoyed both the NCS programme and working for CGO and will hopefully get involved in more of the same next year.