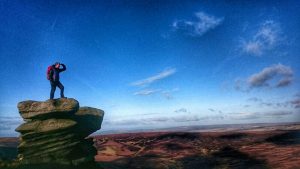 2017 has started with a blast of fantastic, sunny, chilly weather and Wednesday was no exception. After a couple of days of beautiful local walking along the banks of the Mersey and around Chorlton Water Park, a long overdue catch up with Nathan took me out into the Dark Peak. It was exactly a year to the day since our last outing together when we undertook a very wet, wild and windy walk around the Derwent valley reservoirs. This time around the weather couldn’t have been more different and with Nathan eager to utilise his Christmas present ,”Scrambles in the Dark Peak”, we were looking forward to a cracking outdoor day!
Kinder is one of my favourite UK hills. When I first moved to the North West and was dependent on public transport to get out and about I would often be found on the Hope valley train, nipping off at Edale and finding a variety of routes on the South side. As I became more experienced and progressed on my outdoor journey, it became the site of epic navigation challenges, trying to find stones, ring contours and tiny re-entrants amongst the snow, peat and seemingly endless shape shifting groughs…..All that being said, I had not done a great deal of exploring of the Northern edges so was really looking forward to the day. We left our cars conveniently parked next to “The Snake Inn” and set off along the banks of the River Ashop and into the Woodlands Valley. It was soggy underfoot and en route we put up a number of Grouse, but otherwise the whole valley was deserted, in fact we only saw one other walker the whole day, something that wouldn’t have happened on the South side on such a magnificent day. We had plenty of travel and walking tales to catch up on, Nathan inspiring my envy with tales of his exploration of “The Routeburn Trail” in New Zealand, a trail that was snowed under on the one occasion I was in the area! Eventually we reached Nether Red Brook, the first of our scrambles. We followed the brook up until the first junction where we bore off to the right and ascended a couple of tricky, slippy rock steps and continued to scramble our way up into the sunshine on the summit. We headed east taking in views over Bleaklow and across to Manchester before dropping down Upper Red Brook for a spot of lunch. Scrambling descents are not something I do all that often and the practice was useful, foot placement, points of contact and route planning all coming into the equation. As we reached the head of the valley we took the middle of the three remaining groughs and managed a short, sharp and somewhat drier scramble that took us back to the perimeter path. Under a near cloudless blue sky we made our way back along the edge to Fairbrook Naze and from there dropped off the top and made our way back to “The Snake Inn” where there was a beautiful log fire and a warm welcome awaiting!
What a brilliant way to get the serious walking business of 2017 underway. There are so many wonderful places on my doorstep here in the North West and I sometimes forget that it doesn’t always have to be bigger, higher, better to make for a great day out. Thanks to Nathan for the route planning and here’s to many, many more good days out this year!

2 thoughts on “Walking and scrambling on Kinder’s North Edge”