Winter walking in the Cairngorms 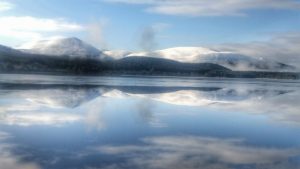 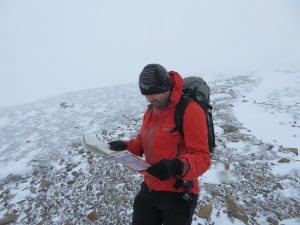 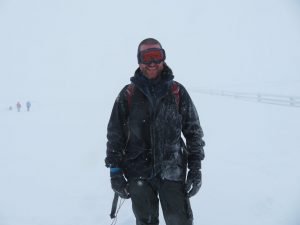 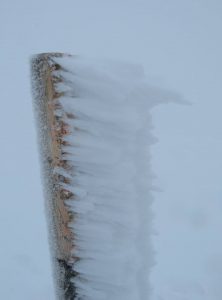 There can be few finer outdoor experiences available in the UK than Winter walking in the Cairngorms. These imposing Scottish mountains get more than the Lion’s share of British snow and in addition to the Winter walking there are plenty of snow sport enthusiasts as well as Winter climbers to be found in Aviemore and the surrounding area at this time of year. Both Al and I had done Winter training courses over the past couple of years with the guys at Cairngorm Adventure Guides (whom I would highly recommend) but both of us felt a bit rusty so this weekend of exploring the Scottish snow was booked in and a couple of beds at the clean and comfortable Aviemore YHA booked.
I headed up a day earlier and after an evening of exploring the hostelries of Aviemore found myself getting a somewhat later start than had been planned. For an easy leg stretcher I decided to head over to Glenmore and from there walk out to Ryvoan Bothy and the beautiful green waters of Lochan Uaine. After watching a beautiful Red Squirrel competing with the Coal Tits for food at the Glenmore Visitors Centre I set off through The Queen’s Forest on the path that contoured along below the ridgeline. Whilst there was snow on the distant hills I hadn’t come across much by the time I dropped through past some beautiful Scot’s Pines into the valley and found myself above the spectacularly coloured waters of the lochan. The waters are said to have got their unique colour from the Pixies washing their clothes in it and it certainly has a magical feel to it….but I reluctantly left it behind and headed up to the bothy at Ryvoan. The author AM Lawrence wrote a poem about the area that contains these lovely lines, “And again in the dusk of evening I shall find once more alone/The dark water of the Green loch, and the pass beyond Ryvoan”. It’s a great spot with some wonderful views and I think it would make for a very atmospheric spot to spend a night. I returned to Glenmore and then back to Aviemore and whilst I was slumbering in my dorm Al was making his way through the night to join me for the rest of the weekend.
We set off on the same route that I headed home on the previous day and it didn’t take us long to make our way back to the bothy. We began to climb from the building and had soon crossed the snowline on the lower slopes of Meall a Bhuachaille. The name means “Hill of the Herdsmen” in Gaelic and at 810m it qualifies both as a Marilyn and a Corbett and it felt like a fine hill as we disappeared into the cloud and tramped through some pristine snow til we reached the impressive cairn at the summit. The snow got deeper as we moved on towards Creagan Gorm where we saw our last two fellow walkers of the day. The temperature had dropped at this stage and the rime ice on the summit was thick and weirdly beautiful but we left it behind and crossed an unnamed summit before ending up at the final peak on the ridge, Craiggowrie, which had magnificent views to the snow free valleys beyond. From Craiggowrie we slipped and slithered our way down the peaty, soupy, snowy slopes to the forest and from there it was a simple route march through the Pines back to Glenmore Lodge.
Day three saw an early start as we headed up to the ski station and began a slow, steady, quiet and snowy climb upto the upper station named after the beautiful Ptarmigans found on the mountain. There were plenty of people on the pistes in spite of the poor visibility but by the time we left the upper station behind and began to climb onto the plateau the crowds disappeared and we were alone in a near virtual whiteout. At 1245m, it is the sixth highest peak in Great Britain and there can’t be many days when you are the only people on the summit! The weather station was being battered by the high winds and we didn’t hang around long before a few legs of navigation practice which took us back to the Ptarmigan station for a well deserved Hot Chocolate. We descended back down to the bottom station and made it back to the Youth Hostel in time for the second half of the Wales v Scotland Six Nations match 🙂
On our final morning AL decided he was going to head off for some mountain biking leaving me to complete a leisurely circuit of Loch Morlich. It was one of those truly glorious mornings, the sort you dream of. The sky was blue, the mountains snow capped and the peaks beautifully reflected in the still, dark waters of the loch. It was wonderful and I can say in all honesty that the mountain panorama on display that morning is the equal of any I have ever seen……pure unadulterated beauty. I don’t know Scotland well and every time I come here I regret that. Winter walking in the Caringorms can be challenging, scary, exhilarating and wonderful. I’ll be back.