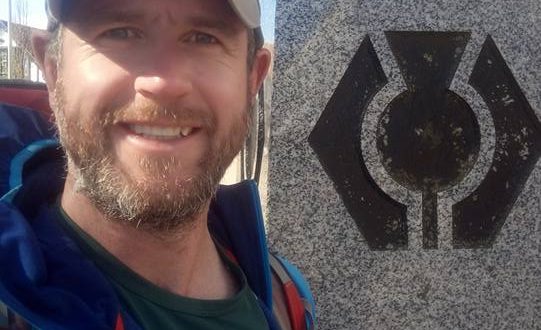 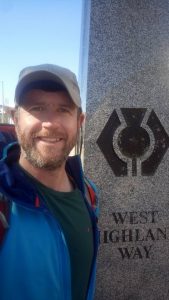 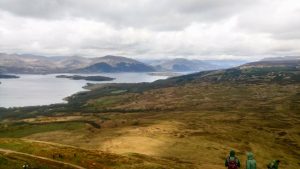 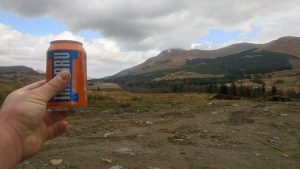 The West Highland Way is surely one of the most iconic of the UK’s long distance walking trails and I have been very fortunate in being asked to lead a group on it this Summer with the lovely guys at Thistle Trekking. With this in mind I thought I would enjoy a rareish opportunity to do some serious personal walking and also do a bit of a reccy on the West Highland Way part one which runs from Milngavie to Crianlarich and which I was doing over three days, each increasing in distance. It was a nice gentle ten miler on day one, fifteen on day two and just over twenty on a long old day three, but, My God, what a walk!
Milngavie (inexplicably pronounced Mul-gey) has a pleasant market town type of feel but you can’t walk twenty metres without a reminder that it is the official start of the WHW. You can either decide that the big sign outside the railway station is your start point or wait until you reach the standing stone in the shopping arcade that directs you onto the start of the way proper! The initial stages duck in and out of mature woodland and follow streams in a kind of bucolic paradise, Warblers flitted amongst the trees, fluffy cotton wool clouds scudded across the blue sky and it felt amazing to be alive. I stopped by Craigallian Loch for a snack at the Fire statue which commemorates the spot where in the 1930s a fire was kept permanently burning by the climbing and walking clubs for the workers and unemployed men of Glasgow. A little later the landscape began to open up with the Campsie Hills in the foreground and the bigger beasts to come looming in the distance. The rest of the day was very pleasant, fairly gentle walking with the majority of it being along an old, abandoned railway line. There were Dippers and Grey Wagtails in the streams, I saw a Cuckoo and the sun shone down out of a beautiful blue sky. The evening was spent in Drymen where accommodation was provided by the lovely “Kip in the Kirk”, a very upmarket, highly recommended bunkhouse with hot, homemade scones to welcome you and lovely en suite bathrooms. Sustenance came from “The Clachan Inn”, which claims to be Scotland’s oldest licensed premises and provided a very palatable pint of ale or two to wash down the haggis bon bons!
Leaving Drymen on day two I was a little jealous of the wild campers packing up in the Garadhban Forest but I soon left them behind and emerging from the trees I was presented with my first view of Loch Lomond and Conic Hill, the first real “up” on the way. The views from the windy summit of Conic Hill were breathtaking and gave a real sense of the sheer scale of the loch, Britain’s largest freshwater body of water. The hill was busy with through and day hikers so I descended the knee crunching path down to the pretty little settlement of Balmaha with it’s statue of Tom Weir, often described as the British equivalent of fellow Scot and wilderness advocate, John Muir. From this point, and for the next 24 hours, the loch is a constant companion as the pathway weaves it’s way along the shoreline through beautiful flower studded mature woodland. There are secluded beaches, gravelly coves and numerous streams and burns wending their way to the loch, it’s beautiful and the waters are fringed by some serious mountains on the far side of the loch as well as Ptarmigan and Ben Lomond looming large to my right. The rain came in the early afternoon (bang on time according to the forecast) and the last couple of hours were soggy but I eventually made it to the Ben Lomond Bunkhouse where Fergus greeted me warmly and I was soon wallowing in a hot bath! Luxury indeed. Whatever your preconceptions of a bunkhouse maybe this place is something else with a cosy lounge (with log burner), comfortable beds and a large well appointed kitchen. An evening in convivial, multinational company soon banished all memories of the wet afternoon.
Knowing I had a twenty miler plus day, I was breakfasted and gone before 07.00am. It was another morning of lochside walking passing Rob Roy’s cave (don’t bother, spectacularly unimpressive) and with more mountain views. I passed Rowchoish Bothy, smoke rising temptingly from the chimney, and pushed on passing the lovely waterfalls and the hotel at Inversnaid. The views of Ben Vane, Ben Vorlich and Ben Narnain grew ever more impressive and after passing Island I Vow and having a spectacularly scenic lunch on the beach I passed a second bothy at Doune and eventually left Loch Lomond behind me as I climbed up to Dubh Lochan and continued on to Glen Falloch. It’s a different landscape here, a very Scottish landscape, as I followed the River Falloch and eventually followed one of the old military campaign roads before dropping down through thich pine forest to Crianlarich. My final evening was spent at the Ben More Lodge watching the snooker in my cosy little lodge and enjoying a few pints by the fire as my socks slowly steamed dry. I am hoping to be able to fit in the second half of the way sometime over the next month or so and can’t wait to come and lead the group along this magnificent path this Summer.