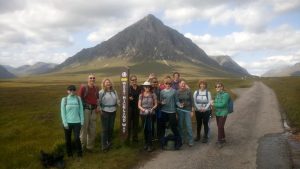 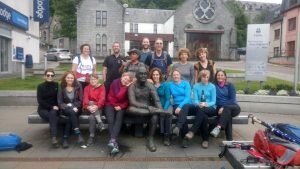 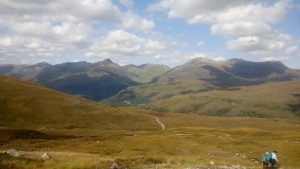 Day five is the day that strikes fear into the heart of even the bravest West Highland Way-er, 19 miles from Tyndrum to the mighty maw of Glencoe. After David had worked his magic and negotiated early breakfasts across the board we left behind Tyndrum and once again hit the military roads. It’s a long, flat stretch to the Bridge of Orchy Hotel beneath the forbidding slopes of Beinn Odhar but the blue sky lifted the spirits and we barrelled along at a fair old pace aware of the mileage ahead of us. Refreshed, literally and metaphorically, by a stop at the hotel we climbed away from the Brisge of Orchy spying Deer hidden on the forest fringe before cresting the Mam Carraigh where our magnificent views of Loch Tulla battled with a horde of voracious midges for supremacy! Another break at the Inveroran Hotel (a personal favourite) saw us leave the hamlet (year round population;1) and begin the gradual ascent of the ancient Drovers road onto the justifiably famous expanse of Rannoch Moor. We almost made it across this wonderfully wild expanse before the clouds massed and just as we were descending towards the splendour of Glencoe the rain hurried us along to the café at Glencoe station. 18 miles under our belt and 70 done in total!! A truly epic day and my favourite on the way…..
Day six is the day of “The Devil’s Staircase”……a name to strike terror into the heart (and legs) of the bravest wanderer….and yet our team strolled up it as if it were no more than a bump in the road. Glencoe, flanked by the majestic mass of Buachaille Etive Mor, provided some stupendous views augmented by sunshine and an (almost) cloudless sky. We lunched above the staircase and as a team agreed it was nearly impossible to imagine a finer spot to wolf down a Spa sandwich. The descent to Kinlochleven is a long one but the pain in one’s knees is offset by the views towards Blackwater Reservoir and over The Mamore Range to see just the merest sliver of Ben Nevis, lying in the direction of our final day. We meandered into Kinlochleven and whilst some sought sustenance in the café at the Ice climbing centre, others opted to enjoy the sunshine with a refreshing drink outside “The Highland Gathering”……..six wonderful days down, just the one to go….. Day
Day seven, and all good things must come to an end, even the West Highland Way. The midges were out in force as we gathered outside The MacDonald Hotel ahead of our last sixteen miles. It was a dreich morning and the views back to Kinlochleven as we climbed through the woods were interspersed with clouds. We followed the old military road through Larigmor, “the great pass”, a quintessentially Scottish landscape of hill and glen and were treated to a display of sheepdog wizardry as a shepherd passed us with his flock ably marshalled by three beautiful collies. There were plenty of undulations and more than a little meandering but we eventually found ourselves dropping down into Glen Nevis and making our way past the old finishing point before eventually reacquainting ourselves with civilisation as we reached mile 96 and the final “boots off” point in Fort William. We had a great evening in the “Great Western Hotel” where haggis, whisky and rhubarb crumble were consumed with gusto and tall tales of epic journeys and midges the size of Golden Eagles were spun around the table! An epic walk completed with a fantastic group!