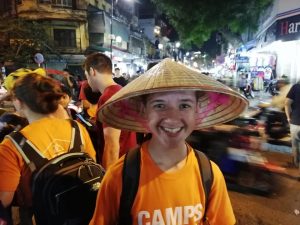 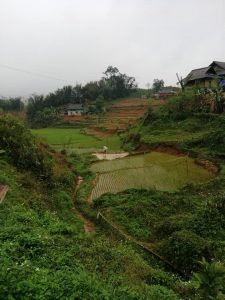 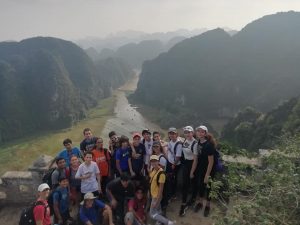 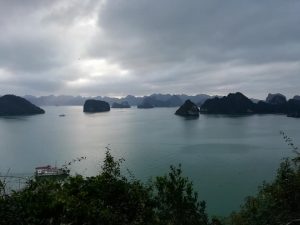 There is a certain exoticism inherent in the place names of South East Asia and whilst I have travelled there quite extensively for both work and pleasure I had never had the opportunity to visit the North of Vietnam. I spent the Christmas period of 2017 in Cambodia and then exploring the Mekong Delta and Saigon/Ho Chi Minh City but the delights of the North proved equal to my expectations on this trip. I was accompanied by a team from the American School of Dubai and we certainly had a full itinerary planned out for them!
Hanoi, the capital city, had a much more laid back feel than the frenetic streets of Saigon. We were staying close to the old town and our first excursion saw us visiting Hoan Kiem Lake, one of the many natural lakes within the city limits. We visited the famous Ngoc Son Temple and our guide explained about the myths and legends associated with it. After dinner we explored the night market and the students bought a variety of “real fakes” and other delights…….
Leaving the city behind we headed out into rural Vietnam and the heart of our adventure. We were staying in the Mai Chau district, a region of mountains and rice paddies, it was incredibly green and beautiful and we were booked into stilted longhouses at a homestay in a small village outside the main town. We were in amongst the Chickens, stray dogs, excited children and all the sounds and smells of village life. We explored the surrounding villages on a bicycle tour coming across buffalo wallowing in the fields, kamikaze chickens and locals dressed in their conical hats out planting the next rice harvest. It was a really interesting evening topped off with a display of local dancing in the evening by members of the White Thai community. Just like in Northern Thailand there are a huge number of distinct ethnic groups amongst the hill tribes here and they all cling proudly to their language and traditions. After the bicycles on day two, day three saw us getting into the heart of the hills on our trek to Pu Bin village. There were some stunning vistas from the winding roads and tracks we took which led through 30 foot high stands of Bamboo to a beautiful travellers rest stop atop a forested ridge. The rice paddies in this part of the world are cut in terraces along the steep sides of the hills and look truly beautiful. It was a bit slippery under foot after the rain and we had a few thrills and spills on the descent but everyone agreed it had been well worth it by the time we reached the village for our delicious lunchtime feast. On our last day in this region we visited a remote primary school in the village of Pa Co where the students helped with some land clearance work and we were treated to a display of Hmong dancing by some of the local littlies. We finished our exploration of the area with a walk through a Hmong village where we saw traditional paper being made and learned a little more about the culture of these proud people.
It was really hard leaving our rural paradise behind but we had plenty more exploring to do as we headed to Ninh Binh and the Tam Coc region. We visited the Hang Mua (Dancing Cave) where dancers used to perform for the Emperor before the team took on the challenge of the 500 steps up to the spectacular Dragon’s Back lookout for some hard earned but stupendous views! We finished our day with a sampan ride along the Tam Coc river and through limestone caves before yet another splendid feast back at our hotel. No rest for the wicked however, and the next day we were on our way to the world famous Halong Bay. The scrum of tour buses and tourists on the dockside was a bit off putting but as soon as we were out on the water it became clear why this place is so justifiably famous, it is stunning….There are over 1500 limestone island or karsts dotted around the bay and they are spectacularly beautiful. We explored caves, climbed to more lookouts, went squid fishing and kayaked in a secret lagoon where we saw Langur Monkeys, but it was almost as good to just sit on the deck and watch the stunning scenery as we gently put-putted along through the channels between the islands.
Vietnam is a beautiful country and now all I need to do is visit all the bits left in the middle!