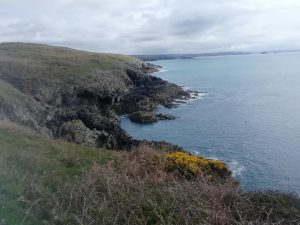 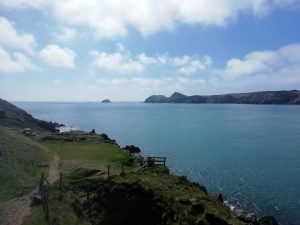 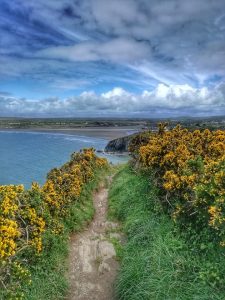 When I was a lad we took a family camping holiday to Marloes in Pembrokeshire. It was a distinctly old-school type of camping with a huge, heavy bright orange canvas tent that my Dad stowed in the ominously named “coffin”, a wooden box of his own construction, in the boot. We had a loo tent and the facilities consisted of a tap in the corner of the field, but there was sausage and chips outside “The Lobster Pot”, there were sightings of Puffins on Skomer Island, adventurous expeditions to Whitehaven Sands and lots of walking on the coastal path, it was wonderful. Thirty five years later I went back and it was just as wonderful and I pledged that from then on I would go every year to a region of the UK that I can honestly say is one of my favourite places in the world! So, with that in mind we decided that in 2020 we would add it to our new walking weekends offer and that, of course, meant a reccy trip to make sure the walks we offer you would be of the highest standard…..it’s a dirty job…….
The jewel in Pembrokeshire’s walking crown is, of course, the coastal path, one of the UK’s official national trails. It follows the spectacular coastline for 186 miles and is a serious undertaking but in a weekend you can easily pick out some of the scenic highlights, hard as they are to choose. Day one and we started out from the quaint harbour at Porth Clais and were soon climbing above the boats and old lime kilns onto the wild flower adorned cliff top. It’s beautiful walking, it was firm underfoot and there weren’t too many ups and downs, but there was a magnificent “end of the world” feeling that you can sometimes get as the land ends and the seascaped horizon recedes. We saw Stonechats, Wheatears, the first Swallows of the year, Ravens and even a Gannet as we picked our way along the rocky edge of Wales until we headed the Ramsey Sound, a narrow stretch of water between the mainland and Ramsey, a close to shore island now designated as a nature reserve. After a lunch with a view the path winds it’s way through stands of Gorse and Bluebells until it reaches the Lifeboat Station at St Justinian’s Head. The lifeboats were out on a practice run as we passed by before turning inland and following the narrow lane (with grass growing down the middle) which took us back to our starting point and, from there, a short drive to St David’s, the smallest city in the UK and well worth a stop not just for the Cathedral but for the great cafes and local art available from the numerous independent businesses in the area.
Newport is our base in this part of the world and day two saw us take a great walk straight out of the town itself! The climb away from the town is steep and passes the castle which is now some lucky soul’s private dwelling. Our goal was the summit of Carn Ingli, the rather beautifully named “Mount of Angels” which sits proud above the town and sports the remains of defensive stone ramparts in a tumbledown manner just below the summit. It was blowing a hoolie by the time we reached the top but the coastal views and views of the Nevern Estuary and the Preseli Hills, distant above Cwm Gwaun more than made up for it. Leaving the summit we tracked across the rough moorland before dropping down towards the main road just before Dinas Cross. A couple of fields later and we were back on the coastal path and following it along towards the delightful harbour of Parrog before a short section of road walking took us back into Newport itself and it’s plethora of excellent places to eat and drink and chew the fat over two days of brilliant walking.

10 thoughts on “Walking in Pembrokeshire”