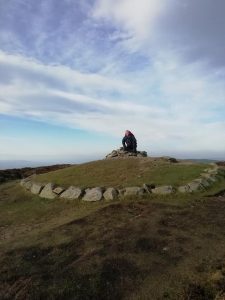 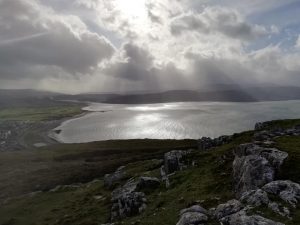 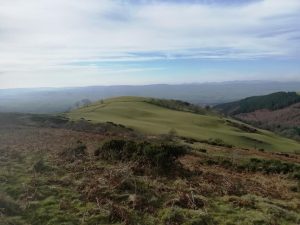 The weekend that Storm Ciara decided to pay a visit was the week we decided to head to North Wales to scope out a few new routes for clients who wanted something different from Snowdonia. Over the course of the weekend we got thoroughly wind blasted and witnessed flooding and torrential rain but also managed some beautiful walks on sun dappled hills and hope they will become firm favourites with you lot in the future.
The Clwydian Hills are a thoroughly deserved Area of Outstanding Natural Beauty but perhaps less well known than the signature Welsh walking areas such as Snowdonia, the Brecon Beacons and the Moelwyns. There is a wealth of ancient history in the area and many of the ridges and hilltops in the area sport the remains of fortifications dating back to the Iron Age. The Offa’s Dyke long distance path which runs roughly along the line of the old earthworks delineating the Anglo-Welsh border runs through the range and we spent much of the day following the National trail’s acorn symbol on fingerposts. The summit of Moel Arthur was our first goal for the day and by the time we reached it the wind was screaming and howling, but blown about as we were the views were magnificent and the landscape opened out in front of us, on one side we looked into Wales and on the other it was back towards England, this is a true borderland. It was a steep descent on the Offa’s Dyke Path to the edge of Llangwyfan Forest and the trees provided a little shelter as we ascended the slopes of Penycloddiau to seek out the second hilltop fort and more far reaching views. It was rough and exposed land that we crossed as we headed down towards a clutch of farms at the head of the valley, as we walked we watched Buzzards and Ravens surfing on the gusts, they sped past barely making any effort!
Eventually we reached the lee of the hill and a sheltered traverse on a muddy farm track which made for messy but easy walking down to the road at the other end of the forest. The last few miles took us on another claggy bridleway on a route that contoured us around Moel Arthur and Glyn Arthur farm/manor and through some mature Beech woodland before we popped out on the narrow lane that led us back to our car. It’s a great route with some history and some quintessentially British countryside views and one we are very proud to add to or guided day out offer!
After a night in the Llandudno Hostel and a very decent pub meal in The Albert http://www.albertllandudno.co.uk/ we were raring to go the next morning on a section of the Welsh Coastal Path leading from Llandudno up over Great Orme and along the estuary to Conwy and it’s famous and imposing castle. It was a stiff climb up onto Great Orme and the wind was, if anything, even stronger than the day before, but it was clear and the views of the sweep of Llandudno prom were worth the effort. We watched more Buzzards and a flock of Chough playing in the gusts as we made our way across to the old telegraph station on the headland before dropping down to the long beach that led to the estuary and eventually on to Conwy. It’s another interesting and varied walk and whilst it has nothing of the sense of isolation of the previous day there is still plenty of history and human interest on this route.
We had planned a further day of walking but the next morning the storm had upped it’s ferocity another level and with discretion being the better part of valour we retreated suitably chastened by Mother nature to the nearest café for a strong cup of coffee and a croissant! It’s too easy to get hung up on Snowdonia and the amazing walking available there but this weekend had proved that there is a wealth of other walking options where things may be a little quieter and the gradients a little less steep. We hope to see some of you on one of these routes in the not too distant future.