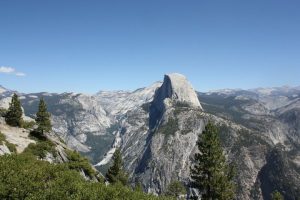 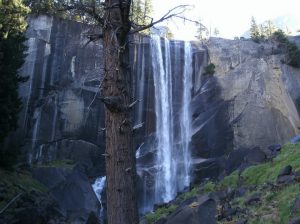 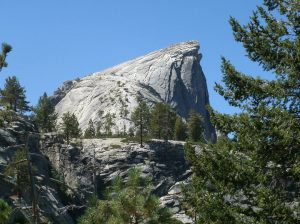 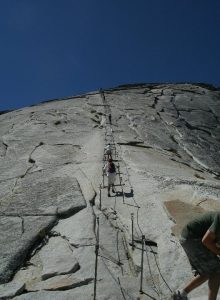 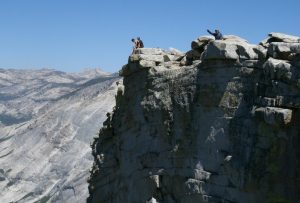 The view of Half Dome from Glacier Point has to be one of the most iconic views in America, a country of big landscapes. Below you the floor of the Yosemite valley stretches into the distance, a scene of rock, river and forest that seems to hark back to frontier times. Dominating the scene is the iconic “chopped apple” shape of Half Dome, the granite monolith that rises 1444m from the valley floor. It was the view I sat and drank in the evening before my planned ascent along The Mist Trail and up the infamous cables and it was simply breath taking.
Due to an increase in popularity Half Dome is now a permit only hike so a little organisation is required but it is well worth the effort. The trail is an out and back route of around seventeen miles and in the Summer heat it’s a significant undertaking none-the-less the iconic status of this particular peak means you’ll rarely be walking alone on an ascent. As recently as 1865 it was described as “perfectly inaccessible, being probably the only one of the prominent points about the Yosemite which never has been, and never will be, trodden by human foot”. However, a mere ten years later George Anderson reached the summit and laid out a predecessor to the now infamous cables and now the popularity of this unique mountain is firmly established.
The beauty of this ascent is the variety of the trail as it skirts the magnificent Vernal and Nevada Waterfalls and passes through the welcome shade of Sequoia forests as you wind your way to the summit. Chipmunks and Blue Jays are frequently seen as well as Mule Deer and if you are really (un?)lucky Black Bears….There are stairs aplenty and once you are past the falls the track is rougher underfoot but the views and the clean mountain air distract from creaking knees or aching muscles as you keep climbing steadily until you reach the infamous cables that help you climb the smooth, shiny granite convex slope to the surprisingly flat summit. The cables are in place from Memorial Day to Columbus Day and although they make the ascent easier there are still fatalities on them and they’re not for those without a head for heights and/or exposure. Around twenty minutes after you start you’re on the summit, a broad expanse of rocks with some mesmeric views and beautiful photo spots including the “Diving Board” made famous by the Ansell Adams photos. On my ascent I was sat perched on the edge when I heard a clatter from the rockface below me and seconds later a leathery, bare torsoed guy in his fifties or sixties popped up onto the summit after a rock face ascent. We chatted about how the climbing culture in Yosemite had changed from the sixties when Rangers frequently chased climbers out of the park, to now, when they are welcomed.
Half Dome is a special mountain in a special place. Yosemite is breathtakingly beautiful and the views from the top of this special peak more than justify the sweat and effort it takes to reach it. Of all the mountains I’ve trekked on this will always stay in my memory as one of the most scenic. I hope that post pandemic I’ll have the chance to return to this stunning wilderness area but, regardless of whether that happens or not, Half Dome will always be one of our favourite mountains!