Walks on the North Coast 500 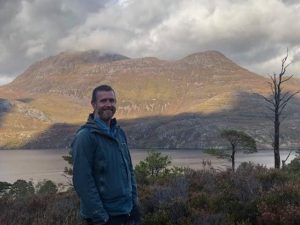 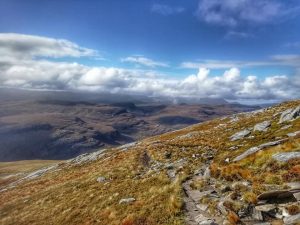 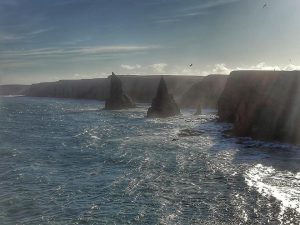 The North Coast 500 is probably best known as a driving route having set itself up as a Scottish “Route 66”, it has a loyal following amongst camper van enthusiasts and motorcyclists but it doesn’t receive as much credit for the numerous fantastic walks that can be done as you follow the route round. We would be delighted to offer a pack of walk options or a fully guided service in 2021! In this article we will look at some of the options available if you do the route in an anti-clockwise direction from Inverness.
Rogie Falls is a great starting point just a half hour drive from Inverness. The main attraction here is the waterfall, but the forest walks are beautiful and the Autumn colours spectacular especially when contrasted with the earthy colour of The Black River. The whole area is heavily forested and there are also good walks in Contin Forest where there are Red Squirrels, Deer and Wild Cats although the latter are extremely uncommon. On the Black Isle, the walk along Fairy Glen is just what the name suggests, magical. It’s an RSPB reserve set in a steep sided gorge that is heavily wooded. The walk ends at a couple of beautiful waterfalls. There is plenty of good walking around Loch Brora and some beautiful wild camp spots on the shores as you head away from the town.
The coastal walks on the North Coast 500 are some of the absolute highlights. The route from John O’Groats to Duncansby Head is a stunner! The views are stupendous, the Orkney Islands, the cliffs and the wonderful Duncansby Sea Stacks….there is wildlife aplenty, Seals bobbing in Sammick Bay, Gannets plunging into the sea and Bramblings picking through the seaweed and disturbing the Oystercatchers and Turnstones. Dunnet Head, while less well known is the actual furthest North point on the mainland and is a wild and atmospheric spot with a Stevenson lighthouse and the remains of radar stations from World War two. It’s rough walking but the views of the lochs and cliffs are outstanding. Moving Westward along the coast and looking inland there is the Flow Country, the biggest area of blanket bog in the world and a bigger CO2 sink than all the woodland in the UK combined. It’s reminiscent of the Peak District, rough, peaty, Heathery and wet underfoot with Hen Harriers scudding low over the marshland and Red Deer in the mists. A less challenging route leads from the village of Tongue through beautiful woodland to the ruined remains of Castle Varrich which has wind blasted views of the Kyle of Tongue estuary and Ben Hope and Ben Loyal the two most Northerly Munros. Ben Hope is an excellent challenging walk in itself. The drive along the shores of Loch Hope on a tiny, “grass grows up the middle” road is in itself beautiful but the views from the ascent are stupendous. Water tumbles down steep waterfalls, mountains roll away into the distance and the broad summit itself swims in and out of the clouds. It’s also the Northernmost Munro which is an extra bonus!
On reaching the West Coast one of the best known walks is the hike out to Sandwood Bay often reckoned to be the most beautiful beach in Scotland and the most remote. The land is owned by the John Muir Trust and the path crosses miles of rough, mountain ringed moorland dotted with beautiful lochs. We saw Lizards, Newts and on the beach itself, a White Tailed Eagle! If you need to work off one (or more) of the excellent pies from the Lochinver Larder there is a great walk along the River Ness (where you can see determined Salmon making their way upstream) through the woodland and then out through the Black Valley and down past the Glencanisp Estate back to the village. Ullapool Hill is a great spot and it’s always pleasant to be able to walk straight out of a town centre. The path climbs up to Meall Mhor for views of Loch Broom and Loch Achall and the distant mountains beyond. A little further down the West Coast lies the Beinn Eighe Nature reserve, the oldest in the UK. The reserve lies on the shores of Loch Maree and has stunning views of Siloch and some of the oldest, most magnificent Scots Pines found anywhere. There are walks through the woodland and up onto the slopes of the mountain itself.
Torridon is another whole world and one that we didn’t quite get the chance to explore on this particular occasion. The drive through the Torridon Valley is enticing, you are surrounded on all sides with the most brutal, magnificent peaks that demand climbing and I can’t wait to return for another visit where we can do some more exploration. The NC 500 is an incredible route full of astounding vistas, it deserves as much time as can be spared and there are walks available to suit every single level.