Kinder with the Rangers 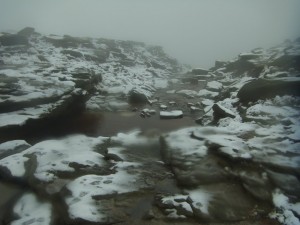 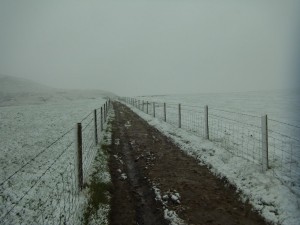 4.3.12
Walking with; Simon Huddlestone from The Peak District Rangers

I was back at Kinder this weekend for the first of my “pre-walks” as part of my bid to become a Peak District Ranger. I am starting to see why people love what I’d always considered a big, ugly lump quite so much. We set off from the Briefing Centre at Bowden Bridge after visiting the plaque that immortalises the Kinder trespassers. We headed back the way I’d come on Wednesday, along the Sett valley and up Coldwell Clough, even at this stage we could see the snow dusting the tops and Simon warned me that conditions might be pretty bad on Kinder. Walking with a Ranger of 30 years standing was informative and Simon told me a lot about the industrial history of the area and how Hayfield used to be famous for printworks due to the quality of the water in the local rivers. We climbed up to the Edale Cross with a bitter wind driving the snow into our faces and decided that we’d head for the relative shelter of Edale Rocks for some lunch.
On Wednesday I’d followed The Pennine Way but today we headed along the brilliantly named Swine’s Back tramping through the virgin snow and following a tumbledown wall to the Rocks where we wedged ourselves into a sheltered-ish spot and considered our options. Although the visibility was poor, it was better than in the fog on Wednesday so we continued on to the Kinder Cairn and head down, battling into the wind, we carried on towards Red Brook. Red Brook was running fast and although the snow was still falling we’d come across a few other walkers and so decided to press on towards the Kinder Downfall and aim for a descent at William Clough. We spotted a couple of hardy Grouse by the Downfall and the views from the edge down towards Broad Clough and the Kinder Reservoir were fantastic. We decided to drop down into the valley just before William Clough and although the conditions underfoot were very slippery we made our way down towards the Reservoir and a welcome brew in the shelter of the valley. Simon told me a few more tales about the area, including the fact that before the Kinder reservoir Hayfield wasn’t connected to the sewerage system and as a reward for the inconvenience that building the reservoir caused the village was finally connected to mains drainage. We headed back along the reservoir watching a flock of 14 Curlews before the Kinder Road took us back in the shade of Kinder Bank Wood to our starting point, cold, wet but exhilarated!
To view the full album please cut and paste the link below into the search bar;
https://www.facebook.com/#!/media/set/?set=oa.169098926542354&type=1