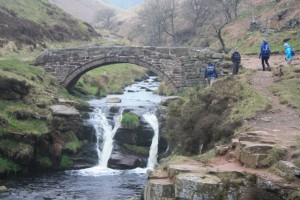 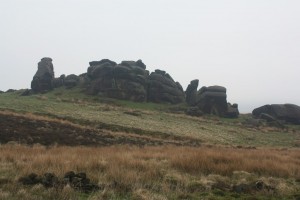 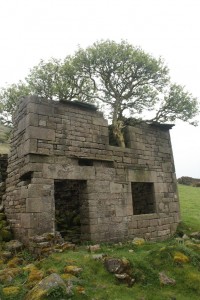 Having tried to book a spot on The Roaches walk only to be told it was full, the Staffs rangers suggested that this outing would showcase the Staffordshire countryside equally well and they were definitely right. The walk was led by John Mills an experienced walker, caver and fell runner with 30 years of experience leading on the Staffordshire moors and there were eight of us accompanying him. The walk started from the remote hamlet of Gradbach on the banks of the River Dane, it was once famous for the old silk mill which is now the Youth Hostel. We climbed up through farmland towards Turn Edge passing fields of lambs, remote farms and the ruins of many barns and stone walls. It is clear the area has been farmed for many generations and some of the farms were very remote and looked battered by the elements. The path below Turn Edge led to Three Shires Head, the point where Staffordshire, Cheshire and Derbyshire meet at an old packhorse bridge over the river, next to a spot called Pannier’s Pool. Apparently it was once a popular site for prizefighting and the whole area has a fairly nefarious past. John regaled us with tales of a murderous family who once lived in the area and preyed on travellers murdering them, stealing their possessions and burning their bodies in their kilns. The border area was popular with local criminals in the days when police jurisdiction was restricted to their county alone and they couldn’t pursue miscreants across the boundaries. We continued over moorland putting up a few lapwing and curlew to reach Wolf Edge for a spot of lunch.The cloud had descended at this point and it was pretty chilly so we didn’t stop for long and instead headed onto Flash which, sitting at 1500 feet, claims to be the highest village in England. Flash was once famous for the counterfeit money trade and has given it’s name to the Flash men as shady characters were once known. Sadly, the village has a pretty run down air to it nowadays and, with the pub closed, we headed through it pretty swiftly and descended towards the beautifully named Flash Bottom.
After ascending Gib Tor for great views over towards The Roaches we skirted the forest plantation and crossed the moorland of Black Brook Nature Reserve towards the Bald Stone. One of the group told us that this area was supposed to have been the inspiration for Arthur Conan Doyle’s “Lost World” and it certainly had an ancient feel to it, although I was put more in mind of the “Hound of the Baskervilles” or some Stone Age tribes making sacrifices on a rock altar. There were more fantastic views from there and after drinking them in we descended across yet more boggy moorland towards the Dane Valley. We passed the Scout camp and the YHA as the rain started to pour down before heading back into Gradbach and the sanctuary of my car. I’d never realised just how wild this area of Staffordshire was and will definitely be returning to explore it further!
To view the full album please click on the link below;
https://www.facebook.com/media/set/?set=oa.208067732645473&type=1