Pen Y Fan with the team from the QE2 Centre 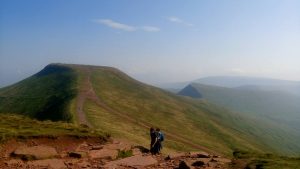 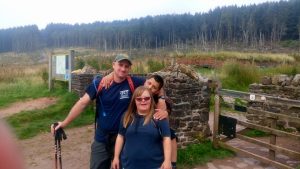 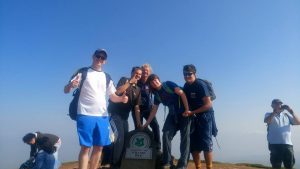 The QE2 centre in Hampshire is an activity provider for adults with physical and learning disabilities and Team Q were visiting the Brecon Beacons on a short residential break and had decided to take on Pen Y Fan as the final challenge of their trip. At 886m, Pen Y Fan is the highest British mountain south of Snowdonia and proved to be a good challenge for the team.
We set off under a blue sky with the sun overhead and plenty of other walkers on the busy track from the lay by near the Storey Arms centre. We split into two groups, a summit party who came with me and a group who decided that they were just going to enjoy a stroll in the sunshine. It was a short, steep climb up to Bwlch Duwynt which is the Welsh for “windy pass” a name that proved to be very apt! It’s a wonderful spot as it’s the first time the summit of Pen Y Fan comes into view having been previously obscured by Corn Du which looms overhead, and the long ridge on the other side leads across to Cribyn. Our summit team pressed on and eventually reached the cairn which was constructed from the remains of a Bronze Age burial chamber. The views were spectacular and we could see as far as the Bristol Channel with the visibility being so good. We watched a couple of Ravens soaring on the thermals and chatted to a group of lads from the Navy who had made the ascent toting impressive looking packs before we headed across to Corn Du, the second highest peak in the region at 873m and topped off with another burial cairn. The views to Llyn Cwm Llwch, the perfectly positioned lake were spectacular. We descended carefully back down to Bwlch Duwynt and liaised with the strollers for our lunch before following the path back down to the car park. The guys were heading out in the evening for a pub dinner and had definitely earned it with the amazing effort that everybody put in.
I like Pen Y Fan, it’s a hill that gives you a lot of bang for your buck and I can honestly say that Team Q’s positivity, friendliness and attitude made this one of my most enjoyable hill days of the year!