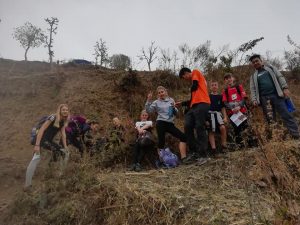 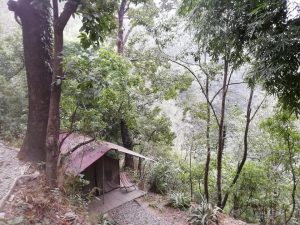 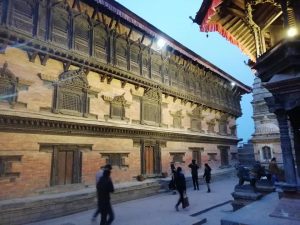 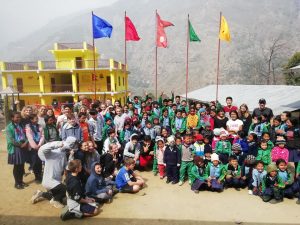 I first went to Nepal a couple of years ago and I instantly fell in love with both the beauty of the country and the kindness of the people, it now ranks alongside New Zealand as my favourite place to visit so I was delighted when Camps International offered me the opportunity to visit again with the Dubai British School whom I had previously led on two trips to Kenya. There were lots of familiar faces at the airport which is always a good sign and after a long day of travel we spent our first night in a hillside guest house outside Bhaktapur and on the way to The Last Resort camp where we were to spend our adventurous week.
The Last Resort is a fantastic spot which is reached by crossing the Bhoketosi River on a very high, very long bridge, which crazy people quite frequently throw themselves off attached to a bungy cord. We stayed in safari tents on a bamboo clad hillside and made the most of the great facilities on the first day playing team building games, learning a Bollywood dance routine and getting to know one another around the campfire. Over the course of the week we had a series of adventurous challenges planned but the first of them was a tough one which saw us hiking to the spectacularly situated Shree Chhayangsing Basic School perched atop a hillside and with (on a clear day which sadly we weren’t blessed with) a great view across to the mountains of the Tibetan border. It was a steep hike on narrow paths that took us through some pine woodland and then through the terraced fields that the locals use to grow their crops on the vertiginous slopes on which they live. In addition to the physical challenge it is always fascinating to see, first hand, how hard life must be for the farmers and their families.
The next day saw us visiting another of the local communities on the opposite side of the valley, this one that had been very badly damaged by the earthquake a few years earlier. On my last visit the children were being taught in tents as their original school had been destroyed by a landslide, so it was wonderful to see the new school building and see the students in their new classrooms. Our students played games, exchanged stories and tried out their Nepalese before we formed into teams with some of the local students to make Momos (delicious Nepali dumplings) for the whole school! No mean feat! It was great to see the new school up and running and the value placed on education as a tool for improvement, here in the Western world with our privileged lifestyles we can become blase about school and spend numerous hours moaning about teachers, facilities and extra-curricular activities, days like this tend to put that into sharp perspective.
After our cultural days it was full on adventure and we undertook a series of great activities including rock climbing, canyoning (basically abseiling down waterfalls) and a great rafting trip on the river. The students threw themselves into all the activities with real enthusiasm and we all agreed it was brilliant to see village life from a different perspective on the river. Every evening after our day we arrived back to awesome food (air dried buffalo was my favourite) and games and reflection around the camp fire. Reflection is an important part of the adventure process and enables all of us involved to look at what worked well, what boundaries we challenged and how we could do things differently next time.
Our final two days saw us back in the cities of Nepal after some hair raising journeys on very narrow, crumbly roads thronged by enormous, slow moving trucks. We spent the first afternoon in the UNESCO World Heritage site of Bhaktapur, an ancient city with a well preserved old quarter centred around Durbar Square and the Palace Courtyard. Whilst, like almost all the sites in and around the capital, some monuments had been badly damaged by the earthquake the majority of the historical buildings remained relatively intact, particularly impressive is the Palace of the Fifty Five windows. The kids spent a brilliant afternoon winding their way through the narrow streets shopping for souvenirs and admiring the architecture. Our last day saw us spend the morning at the Swayambunath Temple (better known as the Monkey Temple) in Kathmandu where we were treated to close encounters with swarms of curious monkeys and witnessed lots of pilgrims making their devotions around the spectacular stupa. There was just time to swing by the Boudhanath Stupa for a quick lunch and last minute shop before we headed off to the airport at the end of a thoroughly adventurous week.
Nepal is a wonderful country and I never feel more welcome anywhere than when I arrive there. It is a country still struggling, five years on, to recover from an enormous natural disaster and the direction it takes from here is manifestly uncertain. China is puring money into a country that feels abandoned and ignored by the rest of the world and much of the infra structure, roads and hydro electric power are being built using Chinese money and labour and with (seemingly) little concern for any environmental impact. Across the canyon from The Last Resort an ugly concrete casino with helipad is being built to fly in wealthy Chinese businessmen. It seems highly unlikely that any of the money being generated by this hugely inappropriate development will make it’s way back to the desperately poor local communities and that’s why trips like this where cultural exchange is such a cornerstone are so important. I really hope I am wrong but I can forsee some troubled times ahead.