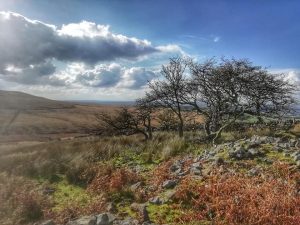 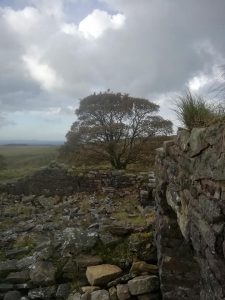 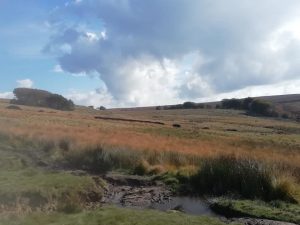 One of the great landscapes of the UK are the expanses of moorland that cover large swathes of uninhabited Northern upland country. As well as being huge carbon sinks (much greater than the woodland of the UK) they have a feeling of emptiness and wildness that we sometimes struggle to find on our overcrowded island! The Peak District and Pennines are two of the largest and best known areas and some of the more popular areas can feel a bit crowded on a sunny day but search hard enough and you can still find plenty of moor with barely a soul in sight.
I have done a fair amount of walking over the years in and around Rivington Pike and the Anglezarke Reservoir area but until this walk I had never ventured up onto Anglezarke Moor. The route started from the car park due North of Rivington Hall Barn and began with an interesting anomaly when a reasonably mature Pine plantation in front of me did not appear on the map, the reverse was true a little bit later when plantations shown on the moor had obviously not been there for sometime. After a brief bit of road walking my route dipped down onto the moor proper towards old farm ruins at Lower Hempshaw and the evocatively titled Old Rachel’s. Apparently Old Rachel was an historical bogeywoman and children were warned she would punish them if they misbehaved…..whilst there is no record of a Rachel owning the farm it was abandoned at the end of the nineteenth century and rapidly fell into ruin in this inhospitable landscape. A bit of boggy walking North took me up to Redmond’s Edge for some fine views across to Winter Hill and, in the distance, the Peel Monumnet. There was also a sturdy stone wall that provided a perfect shelter to munch down a couple of butties in a welcome patch of sun, before following the flagstones across some saturated peat bog to Chorley Great Hill which sits with great panoramic views at 381m above sea level. Having not seen a soul in the morning it was quite a surprise to find the summit busy with walkers all of whom must have ascended via a different route from myself! After a brief stop to take in the views the route dropped following a line above Dean Black Brook down to the hamlet of White Coppice. Sadly, the usually idyllic cricket ground there was overgrown suggesting that the pandemic stopped play in 2020 rather than the more usual rain.
The path followed the line of The Goit beneath the old quarry workings of Stronstey Bank before before coming into the beautiful Autumnal woodland fringing Anglezarke Reservoir itself. I followed the shores of the reservoir weaving in and out of woodland and doing my best to maintain social distancing on a busy section of the walk. Shortly before the dam I took the path heading due East up to Yarrow Reservoir towards the pretty village of Rivington with it’s Green complete with a set of stocks, and from there it was a short wander back to my car after a very satisfying wander. The Autumnal colours in the woodland were stunning, and the reservoir is always scenic but the star of this particular route was the moorland. It felt wild and desolate, but in a good way, the kind of place where you can sit and back and feel like an insignificant speck. 2020 has thrown a lot at us but social distancing on a Pennine Moor is about as good a way of doing it as I can think of.