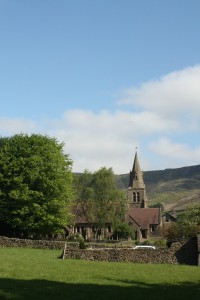 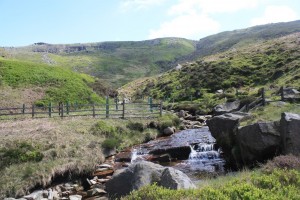 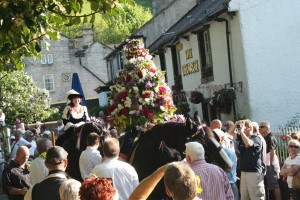 Ewan MacColl’s Manchester Rambler claimed to have “sunbathed on Kinder and been burned to a cinder”, but given that my last two trips up there had involved zero visibility and blizzard like conditions I had my doubts. None-the-less I can now confirm that it is eminently possible to be fried on and around Kinder!
I set off from Edale and headed out past “The Nag’s Head” and the start/end of The Pennine Way towards Grindsbrook. I’ve ascended up Grindsbrook Clough before and it’s a stern but cracking route, but today I decided to take the shorter but steeper path leading up to The Nab. It was a short, sharp shock but I quickly passed Heardman’s Plantation and found myself scrambling up onto Ringing Roger for some stunning views across the Vale of Edale to Rushup Edge, Mam Tor, Win Hill and beyond. The air was incredibly clear and it made the Peak District appear genuinely mountainous. After a chat with a German backpacker who was after a bit of local knowledge I continued up to the edge and headed along above Grindsbrook Clough passing Nether and Upper Tor before reaching the head of the Clough. From here the path pretty much follows the edge until Crowden Clough where I left the handrail of the cliff and headed into the featurless, moorland interior. I clambered and scrambled through groughs and peat cuttings and bog before losing the path altogether, sweaty and hot I headed off on a bearing West until I picked up the dry bed of Redbrook and followed it along to the edge where I stopped for a shady lunch and, despite being harassed by hungry sheep, enjoyed stunning views over the Kinder Reservoir and down towards Hayfield. I had originally planned to carry on round to William Clough, but Redbrook appealed and I decided to descend to the Reservoir via the (initially) dried up stream bed. It was a great descent, hopping from boulder to boulder in the sun, before crossing the brook and following the waters through a beautifully preserved patch of woodland towards the reservoir.
Not far shy of the water, the features on the ground no longer matched the features on my OS map and using my finely honed instinct I detoured above Kinder Head and decided to strike up the slope below The Three Knolls to make my way back to The Pennine Way. I had thought very steep but short would be better than flat but much longer, however by the time I had sweated, slipped and slid my way to the top I was no longer convinced by the wisdom of that particular decision. None-the-less I had made it and continued on past the Trig point to descend via Jacob’s Ladder back into the Vale of Edale. The last mile and a quarter passed through farmland before a shaded lane led me back into Edale, pink, sweaty and knackered but very content.
Having completed my walk I headed over to Castleton for a restorative pint and the Garland Day celebrations. Garland Day is celebrated on May 29th which is known as Oak Apple Day, a commemoration of Charles the Second regaining the English throne. The Garland King and his consort parade around the village (conveniently visiting each of the pubs) before the garland is hauled up onto the church tower. The link below gives a lot more detail on the history of the occasion.
http://www.visitcastleton.co.uk/garland-day-c19.html