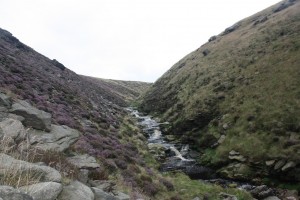 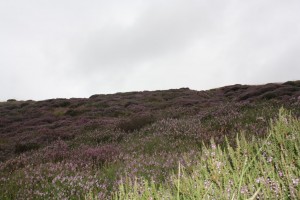 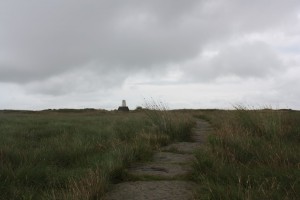 I like paths. When I am on a path I know it is taking me somewhere and even on the odd occasion when that somewhere isn’t exactly where I think it might be, I know it’s going to end up in a defined place! However, there are times when I want a bit more adventure in my life. Maybe it’s the fact that my Mum’s family lived in Africa for much of their early life, maybe it’s a yearning for the carefree days of childhood when everything felt like an adventure, but just occasionally going “off piste” seems like the way to go! Now, I am not comparing the Peak District with the velds of South Africa or plains of Tanzania, but an off path adventure on the bleak moors around Black Hill can still feel pretty wild.
The start of today’s walk was by no means adventurous, a gentle stroll along the shores of Dove Stone, Yeoman Hey and Greenfield Reservoirs. The footpaths were busy with bikers and walkers, both of the dog and power varieties. Reservoirs have been, and can be, relatively contentious, think of Ladybower, beneath the waters of which lie the remains of the villages of Derwent and Ashopton and Mardale now sitting underneath the water of Haweswater.However, I like them, these three provide havens for wildlife and sit picturesquely below the crags of Ashway Hey and the delightfully named Raven Stones Brow. Leaving the reservoirs behind I climbed along the banks of Greenfield Brook before striking out (off path) along Holme Clough. Holme Clough is a beautiful but tough walk/scramble. The stream winds it’s way towards the open moorland, tumbling over waterfalls and cutting a deep, steep sided gorge through the landscape. The walking was not easy, tussock grass, mossy bogs and slippery rocks all provided impediments but, more satisfyingly, just the right degree of challenge to make it feel vaguely adventurous, a feeling heightened by the lack of any other walkers. The Heather on the slopes was magnificent, turning the slopes purple and I came across a couple of patches of Match Head Lichen, beautiful and unusual, and a good indicator of the air quality in this part of the world. Eventually Black Hill hoved into view, I was only separated from it by (yet another) patch of marshy bog, (deep sigh…….)
I struck off East, heading for the path that had come from Black Moss Reservoir and after another foot soaking, located it and made my way upto a perfectly situated stone shelter where I paused for lunch. The moorlands of the Dark Peak do not have the scale and splendour of Snowdonia but the vast expanse of barren wilderness is impressive in a completely different way and still made a memorable vista for a chicken sarnie!  From here I ascended to the summit (582m), informally known as Soldier’s Lump after the Army surveying team who were the first to erect a Trig Point on the boggy top. Apparently in the past, reaching the trig meant wading knee deep through bog, today it was wet but my descent was made much easier as I located the flag stones of The Pennine Way as it headed towards Crowden. As the route climbed above Great Crowden Brook it narrowed to not much more than a sheep track and passed above Laddow Rocks (previously mentioned in my blog as an important site in the establishment of Mountain Rescue). Leaving The Pennine Trail I headed across to Chew Reservoir before following the service road back to Dove Stone Reservoir which buy now was busy with families, picknickers and even more dogwalkers. One side of the reservoir is given over to a woodland with the trees planted in commemoration of deceased loved ones and it struck me that a Rowan Tree in a wood on the shores of such a beautifully situated body of water might not make a bad reminder for myself some day,hopefully, a long time in the future!!