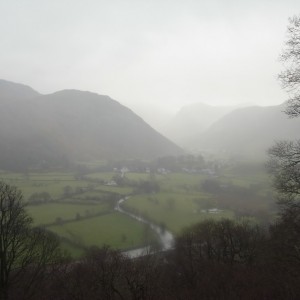 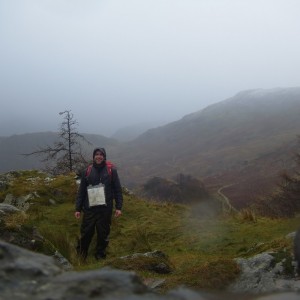 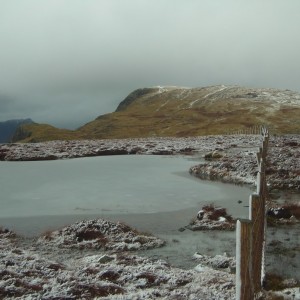 Wainwright is allegedly described Borrowdale as “the loveliest square mile in the Lake District”, it is also the wettest in terms of annual rainfall with the hamlet of Seathwaite taking the honours and receiving around 3.15 metres of rain a year! So, I couldn’t really be surprised as I pulled into the carpark at Rosthwaite that the cloud was low and the rain starting to fall. I took the path across the fields towards the Youth Hostel where I was staying for the night before following the banks of the fast flowing Derwent towards the ominously named “Jaws of Borrowdale”. It got wetter. By the time I started the ascent of Castle Crag,(the smallest Wainwright and the only one under 1000 feet), picking my way through the leafless skeletons of the trees the rain was bouncing off my hood, off the branches and even the Robins were looking for shelter in the Holly. Small it maybe, but Castle Crags is steep and by the time I had made my way through the slate workings and up the wiggles to the War Memorial on the summit I was breathing hard. There was still enough of a view to make the effort worthwhile. Ahead through the cloud lay the village of Grange and Derwentwater and below me Borrowdale lay bisected by the Derwent.
I descended onto a section of the Allerdale Ramble, a 54 mile route running from Seathwaite to the coast at Grune Point and followed it’s gentle route until I reached the tumbling waters of Tongue Gill where I headed uphill through the ruins of Rigghead Quarry, atmospherically spooky as the light levels dropped, and onto the plateau of High Scawdell. In front of me Dale Head was blanketed in snow and looked magnificent. High Scawdell was covered in a scruffy layer of light snow which crunched underfoot as I made my way across to the partially frozen Launchy Tarn before the vertiginous descent down Scaleclose Gill back to the Allerdale Ramble which I followed down into Seatoller before retracing my steps back to Rosthwaite and The Scafell Hotel http://www.scafell.co.uk/ where a pint in front of an open fire helped to dry out my gear! Bed for the night was at the Borrowdale Youth Hostel, http://www.yha.org.uk/hostel/borrowdale where I made the most ofanother fire and another pint or two!
It was minus three when I left the hostel full of porridge and a full English, but the sky was blue and there was not a cloud in sight. Wasdale Head always feels remote, but although Seathwaite has many nearer geographical neighbours it really feels extremely remote and must be a rough place to Winter.The path leads away from the hamlet with Base Brown and Glaramara towering on either side and both tops were well dusted with snow. Crossing Grains Gill at Stockley Bridge which afforded excellent views of Taylorgill Force, the icy path looped round Greenhow Knott before following Styhead Gill up to the eponymous tarn. The snow on Green and Great Gables looked beautiful in the sunshine but until the tarn was reached there wasn’t much underfoot and with almost nobody else around and the sun warm if weak, it was a grand spot for a coffee and flapjack! Leaving Styhead I continued on through deepening snow up to Sprinkling Tarn and then onwards to the foot of Allen Crags. I’d considered heading over to Glaramara but the snow was getting ever deeper (I was passed by a couple pushing on further up complete with skis) and so after snapping a few more Scott of the Antarctic style photos of footprints in virgin snow, I dropped back down to the summit of Seathwaite Fell for lunch and to drink in the views.
Snow makes everything seem more adventurous, turns a walk into a trek, makes you feel as if you are pushing the boundaries and makes an amazing landscape, yet more amazing. It envelops the countryside in silence and yesterday there was nowhere else I’d rather have been! 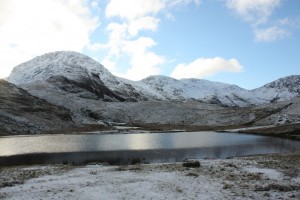 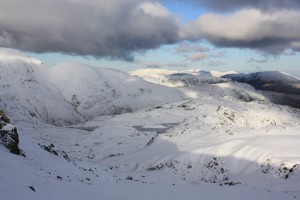 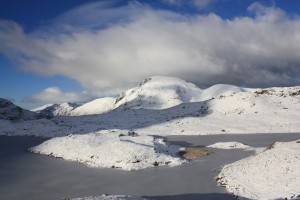