Mam Tor and the Great Ridge and Kinder 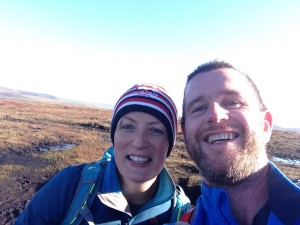 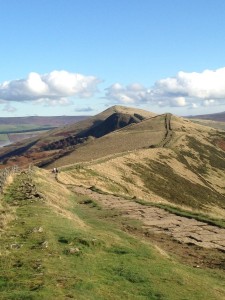 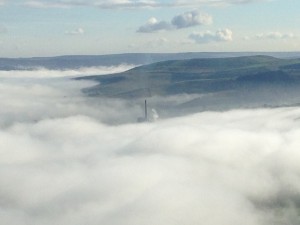 The shin splints finally seem to have mended and what better way to celebrate a return to walking health than with a classic Peak District double header. Mam Tor is a Peak District icon, alternatively known as “The Mother Mountain” or “The Shivering Mountain” it delivers spectacular views of the Edale and Hope valleys for very little effort, and as such, you rarely have the summit to yourself. The hill was used in the Bronze and Iron ages as a fort and there is still evidence of the fortifications just below the top, as a vantage point it’s unsurpassed in the area and there’d have been no sneaking up on anyone residing here. As I climbed up the slabbed steps to the top I was treated to a fantastic cloud inversion that completely hid Castleton and Hope from view. The cloud lapped the edge of the Great Ridge and occasionally the cement works emerged from the mass of white, but it was a truly spectacular sight and one I never saw in a whole season of driving that route when I worked at the Lose Hill Hall YHA. I continued on to the crossroads at Hollins Cross and then walked up the steep, rocky path to Back Tor where I sat enjoying the views to Kinder and over Edale. Another short climb and I was on top of Lose Hill before the slippery, grassy descent towards the village of Hope. Leaving Hope I popped into Lose Hill Hall for a bit of a catch up with some of my old colleagues before making my way through Castleton and onto Odin’s Mine, a lead mine that is thought to date back as far as Roman times. A short hike up “The Broken Road” destroyed by a series of landslips in the late 70’s took me back to the car and a last glimpse over my shoulder at Mam Tor.

The next day I met Jo, who has long been a great supporter of Come walk with me. She wanted to explore a bit more of the Peak District and I decided Kinder would be the best place to afford such an introduction. We set off along Chapel Gate before leaving the track for the pathless, boggy moorland leading to Brown Knoll. It was wet underfoot, but a crisp, clear day with great views towards Lose Hill and the plateau ahead of us. Leaving Brown Knoll we skirted Swine’s Back and after a sandwich at Edale rocks carried on along The Pennine Way to the Kinder Downfall watching the odd Grouse and Golden Plover en route. A bit of bog bashing in a South Easterly direction took us to Pym Chair and we followed the path past Noe Stool and then onto the slabbed path that runs across the exposed moor to the foot of South Head and the Pennine Bridleway. We had the Bridleway to ourselves as we meandered back towards the car taking in a huge flock of Fieldfares feasting on the Hawthorn berries just above Roych Clough.

2 thoughts on “Mam Tor and the Great Ridge and Kinder”