Wild camping in the Lake District 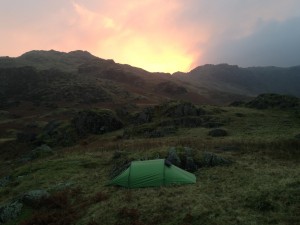 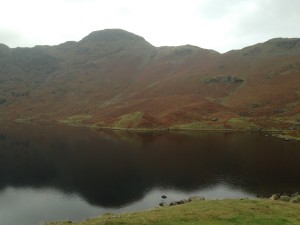 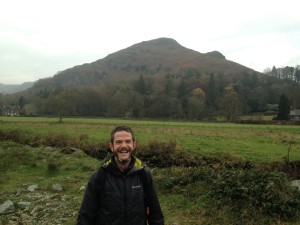 How did it get to the end of November? When was the last time I got out on a wild camp? These were the questions going through my mind as I examined my map of the Lakes laid out before me. It might be November, but it was still reasonably mild and I fancied a night of solitude in my tent tucked away somewhere on the fells. I’d not seen Rob since his wedding either so it was an opportunity to spend half a day walking with him and then when he headed home I could find myself a spot to pitch up in and settle down for the night.

We set off from Grasmere and followed the road up past the Youth Hostel and into Easedale. The path leading up to the tarn is a popular one and was busy with walkers and what looked to be a geography field trip. Although it was somewhat hazy there were still fine views of Helm Crag and beyond it the Helvellyn Range. The path follows the course of Sourmilk Gill before emerging into the corrie glaciated hollow where the tarn itself sits. It’s a picturesque spot with the water tucked below the crags and edges that soar upwards from the shore. It has long been one of the most popular spots in the Lakes and in the nineteenth century a refreshment hut at the outlet of the tarn provided refreshment to weary walkers. After a lunch break we followed the path Eastwards before heading South on the winding path that leads up to saddle between Blea Crag and Great Castle How. Rob had to head home at this stage so sped off like the fell running whippet he is leaving me to make my way more sedately along the pathway towards Little Castle How and enjoying well lit views of Langdale and it’s eponymous Pikes. I eventually made my way down towards Blindtarn Moss and then battled through the scrubby Juniper to find a beautifully situated spot sitting just South East of Easedale Tarn and looking down over Easedale in the general direction of “The Traveller’s Rest”. Darkness falls quickly now and it wasn’t too long before I was in my tent, warming up my chicken casserole and listening to the brillaint audiobook “The 100 year old man who climbed out of the window and disappeared”. The advantage of an audiobook is that you can still take in the views and I watched the lights twinkle in the valley below for sometime before falling asleep in complete silence.

The morning was grey and the cloud low as I made my way down to the tarn to cook up my porridge. One of the great privileges wild camping affords is the opportunity to enjoy much visited sites in solitude. I ate my porridge and drank in the silence and enjoyed the views of the crags reflected in the still waters of the tarn. Crossing the top of the Gill I followed the well maintained path leading under Cockly Crag and down to the valley floor of Far Easedale. From here the path flattened out and it was a gentle early morning stroll in increasingly sunny conditions that took me back into Grasmere and the numerous cars disgorging crowds of eager walkers ready to head out onto the fells. I felt the slightly smug satisfaction of a man who, for an hour or two at least, had had the fells all to himself!