Hill walking and the BMC 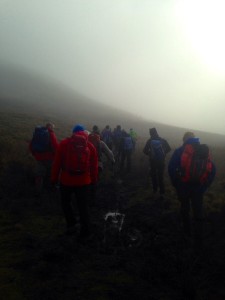 In the week that the British Mountaineering Council celebrates it’s 70th birthday their Hillwalking officer, Carey Davies, had organised a morning’s walk from Hayfield followed by a presentation of the strategy designed to make the BMC “The natural home for hill walkers”. This was based on the perception of the organisation as being climber-centric and, perhaps, ignoring the needs of hill walkers.It is a view I have had some sympathy with and it was the opportunity to perhaps work towards rectifying this that gave me the incentive to attend and see what I could contribute.
A group of about 30 walkers set off from the Bowden Bridge car park, home of the commemorative plaque to the Kinder Trespass, and under blue skies headed towards Tunstead Clough Farm. Conversation ebbed and flowed and long standing access champion and BMC luminary, Henry Folkard, provided interesting titbits of local information. As the group climbed and strung out along the path the cloud dropped and by the time we had followed Oaken Clough as far as the Edale Cross the visibility was minimal and the temperature had dropped. Carey’s suggestion to forsake further exploration and instead head back to “The Royal Hotel” at Hayfield where warming nourishment was promised was accepted with alacrity.
Replete, we were treated to a short presentation by Carey and one by Brian Smith, a recently appointed Independent BMC Director. The presentations focused on the setting up of a Hillwalking steering group designed to increase the BMC “offer” to walkers (as opposed to climbers and mountaineers). They looked at issues of communication, advertising, use of social media and how they could increase the risible statistic that only 30% of survey respondents last year were satisfied by the work the BMC were doing for walkers. Ideas included a redressing of the article balance in “Summit”‘ the appointment of more hill walking ambassadors to join Chris Townsend and an increase in hill walking stories being promoted in non-walking media.
The next step is the setting up of the group and I will be watching with interest to see who is invited to join the steering group and watch the progress that they make. It’s not an easy ask but I was impressed with the vision presented by Carey and Brian and feel it is offering a constructive path forward.