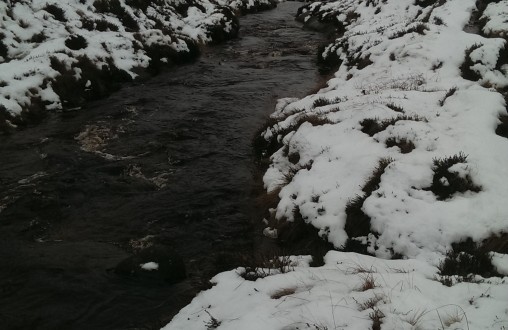 Win Hill to Edale via Kinder 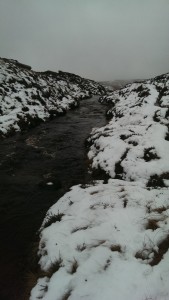 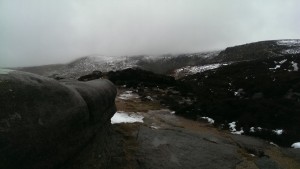 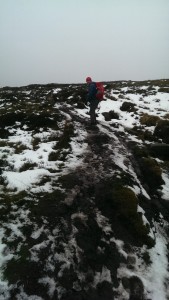 I think it is safe to say that I have probably walked more on Kinder than any other hill in the UK, and yet I never tire of it. Partly it’s because there are so many different ways up on to the plateau, numerous routes from Hayfield and Edale lead up on to the tops, there are routes galore from the Snake Pass, there are gentle paths and rough scrambles up stream beds and cloughs, and all that is before the wild, rough drama of the wind blasted moorland itself! For this pre-Christmas ramble I’d decided to take one of the less travelled routes and follow the ridge from Win Hill.

I met Al in the main carpark at Edale and, leaving one car there, we headed through the twisty, turny lanes to Hope where we set off on the farm track that leads through Twitchill’s farm and out on the heather clad moorland. You don’t have to climb far before the views back to Mam Tor and across to Kinder start to open out in front of you. The sky was still pretty clear and on reaching the appealingly knobbly summit of Win Hill the views down to Ladybower were impressive. The wind was picking up at this stage so we headed back down to the long, broad path that bisects the heather and runs towards the Edale boundary stone. After a brew stop we headed up across the daunting bleakness of Crookstone Out Moor and onto the edge of the plateau still covered in the remnants of wet, grubby snow. This side of the plateau sees a lot less in the way of pedestrian traffic and as the cloud dropped low and the precipitation began the whole area took on a slightly ghostly feel. It wasn’t a day for fair weather walkers, but it was the kind of day that I automatically think of when I think of Kinder. I forget the days of sunshine and blue skies, of gentle cooling breezes and exceptional views and think of wind blasted, driving rain, wetting the face and stinging the skin…..

It was heads down walking that took us round to Ringing Roger. There was some serious water running off the tops and the waterfalls were blowing back up from the edge adding to the general all pervading dampness. There were a few more walkers on the edges above Grindsbrook Clough and the stream running down Golden Clough required us to take a slight detour in order to find a safe crossing spot, but our reward for the weather was the occasional cloud clearance treating us to views back down Grindsbrook to Edale. The scramble down the Clough was wetter and wilder than any of the many I’ve done down there before and by the time we’d made our way back to the village for a well deserved pint at “The Rambler’s Inn” the cloud was dropping even lower and the rain coming down even harder.

Even on a day like Sunday there is something about Kinder that makes it feel like a proper hill. I know that it will continue to draw me back to it, come rain or shine and that every time I am there I will feel there is something special about this dark, scrubby, slightly brutal little hill.