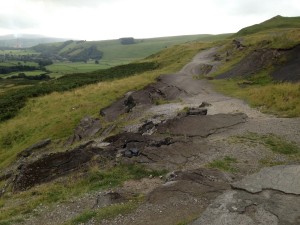 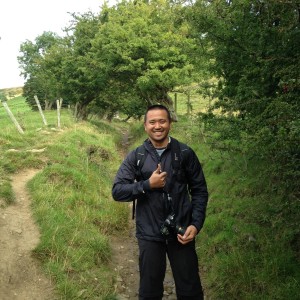 Another day, another Dark peak tour with a fantastic overseas visitor. Antonio was originally from the Phillipines but was living and working in Dubai and was in Manchester as part of an MBA he was doing with Manchester Business School. When he initially contacted me he was keen to find some good photographic views and so I devised an itinerary that took in Mam Tor, the Great Ridge and finished with Grindsbrook Clough where I knew the Heather would be giving the whole area that distinctive pinkish tinge.

Mam Tor was wreathed in cloud as we made our way up to the Trig Point and as we reached it the wind picked up and Antonio commented that he was certainly getting an authentic English experience! Luckily for us the short squall passed over and as we dropped down the flagstone path towards Hollins Cross the cloud lifted giving us the ever impressive view along the Great Ridge to Lose Hill and beyond. At Hollins Cross we picked our way down through the Bracken and flowering Gorse to the valley floor and then detoured round into Castleton via Lose Hill Hall (now the YHA). After a stop for some locally made fudge and an exploration of the village itself we made our way back to the car via the broken road. This road was once the A625 road to Sheffield but it was demolished by a landslide in the seventies and now looks like an extra from a Hollywood disaster movie, it’s certainly unique as far as this area is concerned.

We descended through Winnat’s Pass and took the slow road round to Edale. After lunch we set off through the village and into Grindsbrook Clough where we found a Geography field trip mapping and measuring all and sundry! The Heather was beautiful, the swathes of pink cloaking the sides of the Clough and standing in stark contrast to the greens and browns of the Bracken. We made our way slowly up the path with plenty of photo stops and picking wild Bilberries en route for sustenance. About half way up we angled off from the route of Grindsbrook and climbed steadily up onto the slopes of Grindslow Knoll which gave us a great perspective on everywhere we’d visited during the day. We made our way down to Edale and from there onto Ladybower Reservoir and back over the Snake Pass and home again.

Antonio was great company and I learned a lot about both the Phillipines and the UAE, two new places on my “to do” list. It was a pleasure exploring this beautiful national park and I am really looking forward to seeing some of the photos he took during the trip.