Rydal to Buttermere and Loughrigg with Christine 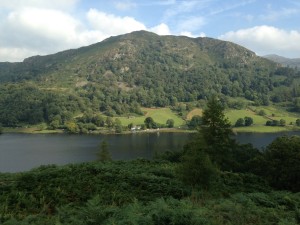 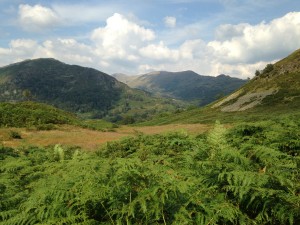 Christine was visiting the UK from Hong Kong and whilst she had spent time in the Lake District before she hadn’t been out walking in the area and so contacted Come walk with me to organise a day walk for her. As she was staying in Ambleside, and after some consultation, we decided on a circular route from Rydal to Buttermere and as we’d ended up making good time we finished with a short loop up onto the tops of Loughrigg fell.

We set off under blue skies and took the path towards Rydal water. We followed the higher route which led us to the spectacular Rydal Caves and afforded us great views across to The Nab. We followed the Loughrigg Terrace route staying high above the water and then dropped down through the mature Beech woodland until we reached the shores of Grasmere. After a break where we watched Tufted Ducks, Mute Swans and Mallards on the water we followed the shoreline path which eventually broke from the water’s edge and delivered us down into the village itself. Grasmere is intimately associated with Wordsworth and I explained a little about the poet and his life and works to Christine as we broke for tea in the Miller Howe cafe just across from the village green. We made our way through Grasmere past the famous gingerbread shop and after a stop at the Wordsworth family grave we exited passing Dove Cottage and gradually climbed up onto the coffin route.

The coffin route originally ran between Rydal and St Oswald’s Church in Grasmere and has been in use since at least the Thirteenth Century. It was the route taken by coffin bearers in the days before Ambleside had a church with consecrated ground that could be used for burials. It’s rough walking and must have been extremely arduous going with a coffin on your shoulders. One of the resultant phenomenon is what are known as “coffin stones” large, flat, strategically placed stones that the bearers used to rest the coffin on en route. We used them rather more prosaically to rest on as we made our way towards Rydal Mount another Wordsworth property. The Autumn colours were just starting to show themselves and the Rowan, Hawthorn and Sloe were all fruiting. We also tried Blackberries and Bilberries as we continued on our way.

Having made good time I decided we had enough energy and daylight to explore a little further. We continued down to the stepping stones at Under Loughrigg, one of the most picturesque spots in the whole of the Lakes to my mind. A further stroll along the lane and then we were climbing gradually across Fox Ghyll and up onto the Bracken clad, rough, lumpy tops of Loughrigg. We picked our way over the hummocks and crags before eventually descending back on to the path we had originally taken above Rydal Water itself.

Whilst this may not be one of the wilder walks in the Lake District it has a tremendous amount of interest. There is the Wordsworthian association, the caves, the history of the coffin route and the opportunity to stop for tea, a pint or a snack in the village of Grasmere. There are plenty of options to extend the walk in terms of challenge or distance and hopefully when Christine returns next we will have the chance to show her another fantastic route.

2 thoughts on “Rydal to Buttermere and Loughrigg with Christine”