Australia with Salewa “Get Vertical” and Cape to Cape Explorer Tours

Walking with; Al, Laura, Flo, Kathi, Carlo, Franzi and the guides from Cape to Cape Explorers 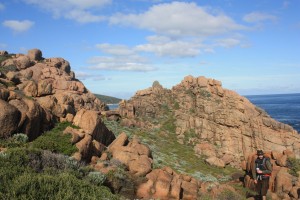 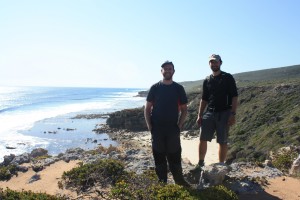 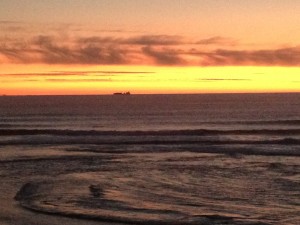 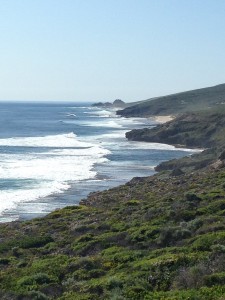 Some things in life are just too good to turn down. So when a long established walking buddy phoned up and told me he had just won a walking holiday Down Under with a load of free swag from Salewa and he couldn’t think of anyone else who might be free and interested at short notice…..well, what was a bloke to do! The trip was part of the Salewa “Get Vertical” competition and campaign and we were kitted out with shoes, jacket, rucksack, base layer, some very bright trousers and a solar charger as part of the deal, again, what’s not to like….
We started our trip in Perth, the capital of Western Australia, and the most geographically remote city in the world. In the spirit of adventure and instead of staying in the city we spent our first “Get Vertical” day on Rottnest Island, a short ferry ride away from the suburb town of Fremantle. We hired a bike each and spent a pleasant couple of hours cruising around the island. We met the Quokkas, a kind of miniature Kangaroo that early settlers thought was a kind of rat and hence named the island “Rat’s Nest”, personally I think the description is a little unfair and they’re pretty cute, they are certainly completely unperturbed by humans. Highlights of our island tour included the views from Cape Vlamingh and North Point and a very chilly dip in the shadow of the Bathhurst Lighthouse.
The main focus of the trip was a “Best of….” four day package walking on the Cape to Cape trail with guides provided by Cape to Cape Explorer Tours. The trail links Cape Naturaliste and Cape Leeuwin and takes in a diverse range of habitats as it traces a path along the Western Australian coast. Day one saw us leave Cape Naturaliste and Australia’s smallest lighthouse behind and pick a path through some spectacular foliage to the Sugar Loaf, an offshore rock formation. Although it’s only early in the wildflower season we saw a variety of Orchids and a plethora of other beautiful flowers. We had lunch on “3 Bears Beach” named for the three famous surf breaks and then after passing through an area of fossilised trees we ended up with an even colder dip in the lagoon at Yallingup. A fish barbecue overlooking Surfer’s Point with a setting sun on the horizon before retiring to our base camp in Prevelly wasn’t the worst way to end a spectacular day. Day two saw us leaving Smith’s Beach and heading out through a landscape of pink granite formations and more wildflowers until we reached Canal Rocks. It was a day of spectacular colours, the pinks and yellows of the flowers, the blue of the sky and white of the surf, the reds and ochres of the earth….it really was something special. There were swimming stops at “The Aquarium” and a slightly scary, natural jacuzzi at “The Spa” before we ended with the coldest dip yet at Quinninup Falls where we came face to face with a huge Dugite, one of Australia’s (and hence the world’s ) deadliest snakes. Maybe it was our Dugite encounter but on the way home we stopped at the Cape Grace winery for a very welcome tasting of some top quality wine
Day three saw us leave behind the surfers on Redgate Beach and head up to the caves at Bob’s Hollow. The clifftop path was then crowded out by even denser foliage and by a carpet of wildflowers and we eventually made our way away from the sea and into the shade of the Borranup Forest. The forest comprised of stands of native trees including the Jarra (stringybark), Maree (Red Gum) and the Karri, a spectacular native tree once heavily favoured by loggers. We also saw three Red-Tailed Black Cocatoos, beautiful and endangered and a real privilege to see. After being picked up on the forest road we continued on to the Giant’s Cave where we treated to a guided tour of this enormous system complete with galleries of stalagtites and mites and the eerie experience of complete silence and darkness deep in the innards of the earth, another very special and unique experience. Our final day of walking took us along the very last section of the trail, the 2 km to Cape Leeuwin, the South Westernmost point of the country and the place where the Southern and Indian Oceans meet. It’s the site of another romantically placed lighthouse and a land of real extremes of weather. We were blessed with sunshine for our lighthouse tour which left us with a birds eye perspective of the exposed headland and crashing waves. The guides from Cape to Cape Explorer Tours were a great bunch who added humour, knowledge and enthusiasm to our tours and helped us to make the most out of our whistle stop tour.
Salewa had one more treat in store for us, the Sydney Bridge Climb after a day of exploring the beauty of this iconic harbour city Al and I had already taken in the Botanic Gardens, Mrs MacQuarie’s Chair, the Opera House, the Darling Harbour Ferry, the Aquarium, the fish market and the Chinese Garden of Friendship before we finished our whistle stop tour at the Observatory that sits above The Rocks. I’d always considered the Bridge Climb to be a bit of a tourist trap but the views were superlative, across the huge span of the city as the early evening lights came on, in one direction out to Sydney Head and in the other across to the sun setting behind the Blue Mountains, it genuinely ranks as one of those “once in a lifetime” experience.
As I said at the start, sometimes things are too good to turn down and I owe a huge debt of thanks to Al, to Salewa, the guys at Cape to Cape Explorer Tours and Flo, Kathi, Carlo, Franzi and Laura! Thanks guys, it was a blast!