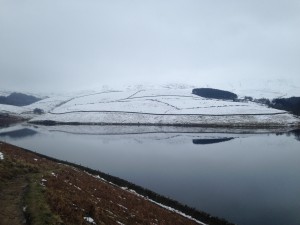 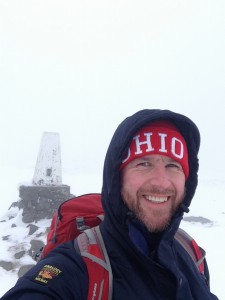 Kinder holds a very special place in my affections, it is probably the hill I have spent more time on than any other, due in part to it’s proximity to Manchester, but also because it offers a seemingly ever changing and challenging environment. Of the two main gateways I have probably used Edale more but Hayfield is a lovely little village and offers a worthy alternative route or two up onto the plateau.
I parked at Bowden Bridge, near the site where the Kinder trespassers are commemorated by a plaque on the rock wall. I followed the lane along to the Kinder Reservoir, built in 1910-11 to supply water to the expanding population of Stockport. It was very still and the waters were only disturbed by a couple of Grebes and Geese. I reached William Clough, an attractive little valley cutting through the flanks of the plateau and began the steady, slightly slippery climb. The snow was quite compacted but picking a route was relatively easy, I just followed the tracks of the sheep who were sheltering in the clough. On reaching the top, the wind picked up, the cloud dropped and that was the end of a view for somewhere around the next six miles. In spite of some quite deep drifting snow the route of The Pennine Way was fairly even to discern even in the very flat light, but I took the odd detour in order to practice a few of the winter navigation tips I’d picked up in the Cairngorms the previous week. Walking off the path was tough with waist deep snow and stinging spindrift but it was satisfying and I spotted a couple of Grouse. I paused a while at the Kinder Downfall admiring some magnificent icicles and that kind of all encompassing silence that you only get with a heavy blanket of snow.
I’d originally considered dropping off the ridge at Red Brook but an initial exploration of the path found deep drifts and little in the way to encourage me so I headed back up to the edge and made my way to the Trig point at Kinder Low where I saw the only other group I saw all day, I think they were as surprised to see me emerging from the murk as I was to see them! It’s pretty rare tht you have Kinder almost to yourself! I continued to follow The Pennine Way until emerging cloud near the Edale Cross and then following the path down towards Coldwell Clough. Below the cloud the monochrome landscapes of South Head and Mount Famine were picked out against a greyish sky. By the time I made it back to my car it was hard to imagine how wild it had been on the tops, the visibility had definitely been less than it had been the previous week in the Cairngorms and it just goes to show that just because you know a hill well it is always dangerous to underestimate it