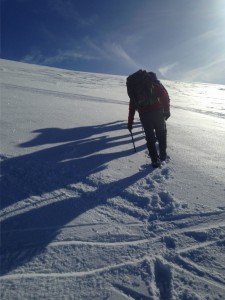 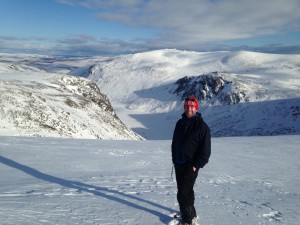 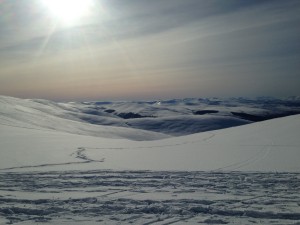 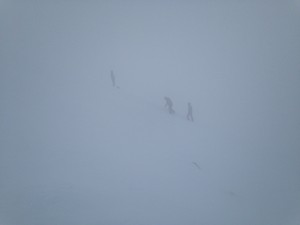 Summer walking and winter walking are two very different beasts and whilst the skill set that I had developed stood me in good stead in the Summer I was keen to develop new skills and make myself a more confident four season walker. I have also shamefully neglected Scotland in walking terms but figured that if I was going to find “proper” Winter anywhere in the UK then the Cairngorm plateau was a pretty decent bet, so I contacted Liam at Cairngorm Adventure Guides, booked a room at the Nethy Bridge Hotel and kept my fingers crossed for snow!
I arrived on the Friday and read the forecast with excitement, two days of sun and snow followed by a less stable report for the Monday, seemed like the perfect combination to me! Friday night was spent watching Wales win at rugby and thinning the blood with a glass or three of red wine! Breakfast the next morning was substantial and by the time I met Ian (our guide), Jon, Elly and Gosia I was raring to go. We spent the first day in the area around the Northern Corries. The snow was crisp and white, the sky blue and the visibility seemingly infinite, it was as perfect a mountain day as I can remember and one the equal of many more exotic locations. The feel of the course was very much “A mountain day with skills” rather than a series of “lessons” and as such it felt natural. After a morning of walking we spent some time exploring the world of crampons and ice axe arrest. As well as looking at the practical application we talked at length about the differing factors to consider when deciding whether to use them or not….we also discovered we were very bad at estimating the angle of degree of a slope!! Eventually we made it up above Cairn Lochan and then crossed the plateau until we were above the frozen valley containing Loch Avon and the famous “Shelter Stone”. By the time we made it back to the ski station, a journey on which we saw a Golden Eagle, I was exhausted, exhilarated, sun and wind burned and ready for a plate of haggis and a bottle of local “Cailie” beer.
Porridge on day 2, and then a drive through the forest and some navigation practice. If anything the weather was even better as we ascended Meall Tionail after assessing the avalanche risk! Our goal for the day was Sgor Gaoith and we eventually reached it after a long, slow ascent. The views down Gleann Eanaich were ample reward for the effort and we had a chilly but scenic lunch on the summit. Our route back saw many more spectacular views and the group got buzzed by a glider before we eventually reached the sanctuary of the forest once more. Jon and I bid a farewell to the girls and headed back to our respective accommodations knowing the weather on Monday was less likely to be as friendly as the weekend had been.
Even though the weather in Aviemore looked reasonable on the morning of Day 3 by the time we reached the Ski station it was clear this was going to be a very different type of day. The cloud was lower, the light flatter and the wind was whipping up stinging spindrift. We spent more time practicing our skills and Ian showed us a variety of more complicated ice axe arrests. There is something disconcerting about lying on your back in a blizzard with your head facing down a steep, snowy slope….however I now know what to do if I find myself in that situation again! We also headed up to Coire an t-Sneachda where we practiced crampon work on steeper and icier ground, quite nerve racking 🙂 On the descent I was lucky enough to see 5 Ptarmigans almost invisible against the snow and looking far more comfortable and at home in the Arctic conditions than I was.
Overall, I can’t praise Ian and Cairngorm Adventure Guides highly enough. Ian was very professional and communicated well and the strategy of mixing the skills into a typical hill day gave them context and gave us a much better experience. I am now really looking forward to spending more time in the snow and definitely more time in the Cairngorms!