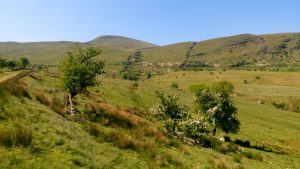 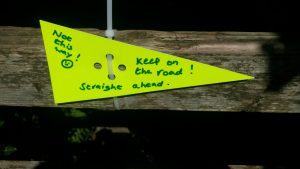 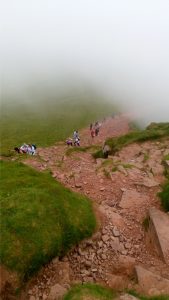 Having worked on the Peak District Trekfest last year it was great to be invited to work on both of these mass participation walking events this year. Almost 600 people walking in teams or as individuals, and the vast majority of them raising money for charity, took part in the weekend which was blessed with some glorious weather. The routes available were 25,50,75 or 100km and all the routes took in the peak of Pen Y Fan. Base camp was at the Brecon showground and on offer there were hot showers, good food and even a bar all bathed in beautiful sunshine.
On the Friday my role was route marking the end of the 50km route. I started out from the carpark just South of the Storey Arms Centre and headed off down the Taff Trail. It was comfortable, peaceful walking with few people and only the odd sheep for company. The Hawthorn was coming into flower and there were still remnants of the amazing Bluebells that we’ve had this year. As I continued towards Brecon I started heading down tiny, high banked lanes where more wild flowers proliferated and was passed by the odd tractor engaging either in muck spreading or haymaking. The final section took me back through the edge of Brecon and along the banks of the River Usk and into camp where the first participants were starting to arrive.
After a night in the tent it was an early start before heading up to Checkpoint three where I had started the day before. Pen-Y-Fan was busy! And I joined the hordes making their way up the steep but stepped ascent, it was hot work with 12 litres of water in my rucksack which was being ferried to the summit to help keep the walkers hydrated. I spent three to four hours on the summit welcoming up the walkers on the 25km route and providing emotionalFull album on Facebook and physical support for those struggling with the last steep, rocky scramble to the top. Initially I had planned to move on with participants on the longer routes but as a couple of walkers on the 25km had had to drop out, I ended up sweeping the 25km route home. This led me down off the summit onto Corn Du and then gradually past Llyn Cwm Llwch and back along the country lanes until we were all safely back in camp.
My final duty saw me up and at ’em on Sunday morning to help support the last of the brave 100km walkers back into camp. Having arrived at Checkpoint 7 it was a case of support and encouragement as the last participants made their weary way through the lanes bathed in beautiful early morning sunlight.
It was a great event, and talking to the participants it’s clear that as both a fundraising opportunity and an individual challenge it had meant a lot to a lot of people. The Brecon beacons is a beautiful and underrated part of the world and I even got to spend a night with my Granny on the Thursday night!