Walks on the West Pennine Way 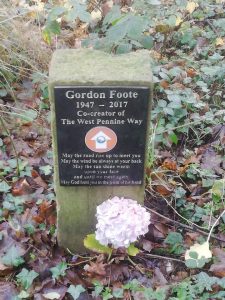 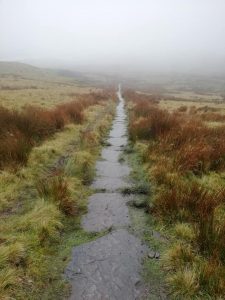 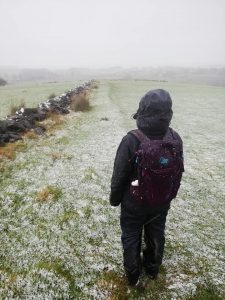 Whilst the Pennine Way is one of the best known long distance footpaths in the country, it’s only recently I have discovered it’s little brother, the West Pennine Way, which was devised in 2016 by members of the Greenmount Village Hiking Group. So, with a couple of spare days in the week I decided to try out a couple of the circular routes from the website that incorporated large sections of the path. It definitely felt as if Winter was coming over the course of the two days as we made our way through low cloud and sleet and snow, but the bleak beauty of the area is definitely showcased on these sections of the 75km whole.
That’s the thing with The Pennines, when I think about the most appropriate adjectives they seem to have negative connotations; Bleak, rough, wild…..and yet I mean them as positives. These are the qualities that make much of the landscape so empty apart from the sheep and the clumps of Red Fescue dotting the dark, peaty tops. The first walk saw me climbing away from Shawforth into the low cloud around Trough Edge, and then crossing the snow flecked peat to the trig point at Trough Edge End. There is something quite satisfying about disappearing into the cloud and the enveloping silence but I was soon dropping steeply down to follow the track between Weather Hill and Ramsden Clough Reservoir and onto the evocatively named Foul Clough Road. The route passed old coal mine workings and desolate, lonely farms before dropping down through woodland to the village of Walsden where I found a cute picnic spot next to the Rochdale Canal. After a bit of sustenance it was a long, steep climb out of the village, passing Pigs and Donkeys in the fields, until the path skirted Ramsden Hill on the ancient path known as Long Causeway which was used by pack horses to travel between Rochdale and Todmorden. All around the route there were signs of mines and ancient settlements but it had all been neatly assimilated back into a landscape that on the face of it still appeared to be wild. In the end there was more bog trotting before I dropped back down to Shawforth via the path above the old quarry workings.
The next day we headed across to the village of Greenmount just outside Tottington. As we set off we saw a neat little memorial to Gordon Foote, named as “Co-creator of The West Pennine Way”. A steep climb through woodland took us to the ramshackle and rundown Windmill Farm before passing the sadly Covid shut “Packhorse” pub at Affetside. A long, slippery, boggy descent including a run in with a boisterous Ram saw us drop down to Jumbles Reservoir, a favourite spot for dog walkers and exercisers. At this stage the snow was falling pretty heavily and we were happy to find shelter in an old pill box near Lithermans Bridge where we grabbed lunch and warmed up a little. We passed Turton Tower and it was head down into driving sleet as we headed to Turton Bottoms and then on, passing a “Walking Dead” style caravan as the snow fell more thickly around us. The outskirts of Hawkshaw were being defaced by a bunch of ugly new build townhouses and we left them behind and stomped through yet more ankle deep sludge until we were crossing Greenmount golf course and heading back into the village.
It’s an area that I have discovered during lockdown and it’s been a strange year without much in the way of travel or mountains but the West Pennines really appeals to me. It’s a less well known walking area and many of my walks in this area have seen little in the way of other pedestrians and there’s something very appealing about that. It’s the kind of landscape that somehow suits snow and low cloud and blustery days and we have added a number of Pennine routes to our walking offers for 2021!

2 thoughts on “Walks on the West Pennine Way”