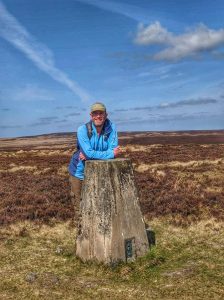 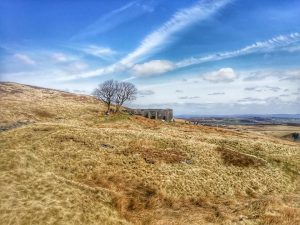 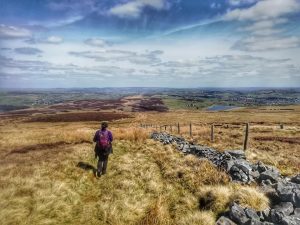 Few families have had as enduring an effect on the canon of English literature as the Brontes. The three sisters from Haworth on the edge of the Yorkshire moors have become literary icons and draw thousands of literary fans from across the world to the pretty village with the iconic steeply rising High Street lined with all manor of shops designed to part the eager visitor from their cash. Their brother, Branwell, never quite as famous as his siblings, is commemorated on a plaque on the wall of one of the local pubs where he spent much of his short life. I had recently encountered a section of the Bronte Way on my walk from Wycoller and this route, undertaken on a glorious, blue skied day, plunged me straight back into that world.
After leaving the village and passing by the walled cemetery on it’s outskirts we traversed around Penistone Hill and followed the Bronte Way along the edge of Haworth Moor and above the Lower Laithe Reservoir and South Dean Beck. The views were expansive, the sky cloudless and alive with birdsong and we saw Skylarks, Meadow Pipits, Curlew, Lapwing and Red Grouse as we made our way towards the Bronte waterfalls. The falls themselves are small but set in a pretty valley and we watched a Willow Warbler as we sat and fortified ourselves with coffee before the next section of our walk which rose up from the valley floor to join the Pennine Way just before the ruins of Top Withens Farm. Whilst apparently bearing little resemblance to the Earnshaw home in “Wuthering Heights”, the ruins have long been linked to the story and their setting certainly seems consistent with the dark, brooding heights of the novel. Leaving the busy ruin behind we took a detour up onto the rough top of Delf Hill and across to the isolated Trig Point standing with stunning views across yet more lonely moorland. We then rejoined the Pennine Way as far as the top of Dick Delf Hill before a mile or so of Heather bashing took us a beautifully quiet lunch spot at Near Oxenhope Edge. The recent dry weather was very evident as the peat and Heather were tinder dry and it was all to easy to see how an irresponsible spark could spark the type of conflagration that has become all too common over the last few years on the upland moors.
Lunch complete we dropped down sharply off the tops and cut across towards the lonely farmhouse of Harbour Lodge marooned at the end of a mile and a half track that cut back across the middle of Haworth Moor. We saw yet more Skylarks, as well as Wagtails and Wheatears before we re-entered the dog walking orbit of the village itself as we crossed back over the lower slopes of Penistone Hill.nIn our absence the village had become very busy but we enjoyed a walk down the High Street and a well deserved ice cream in the park before leaving Haworth to the literary devotees once more!

2 thoughts on “Walking in Bronte Country”