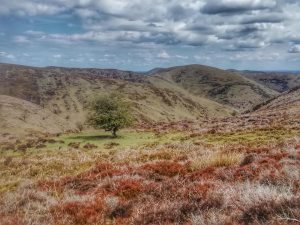 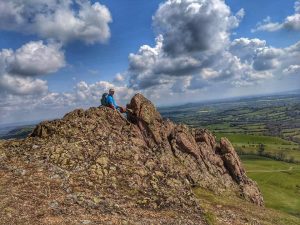 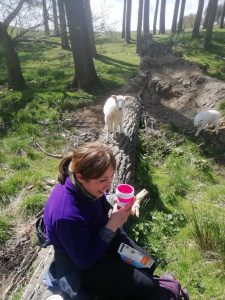 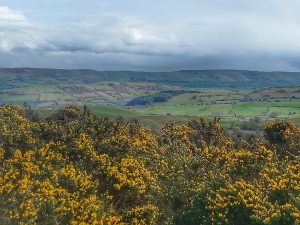 When you think of the best places to go walking in England, the mind naturally gravitates towards the “big hitters”, the Lake District, Peak District or Yorkshire Dales, for most people it doesn’t tend to conjure up Shropshire which is a shame as the walks in Shropshire that we undertook on a long weekend were some of the best and most spectacular we have done since lockdown began. Shropshire is border country with the Welsh border and Welsh influence obvious as you explore the county. There is a wealth of industrial heritage around Ironbridge but it’s the area covered by the Shropshire Hills Area of Outstanding Natural Beauty that contains the most scenic of the walks.
We set off our on our first walk from the hamlet known, unpromisingly, as The Bog. It was far more scenic than the name suggests and we were soon meandering up a country lane past a field of Llamas towards the outline of Nipstone Rock. A quick scramble up the rock afforded wonderful views in all directions including that of a Cuckoo (the first I have seen in a number of years) being mobbed as it scudded low across the landscape. We followed the Shropshire Way up onto the area of Stiperstones itself in spite of a brief flurry of unseasonal snow. Cranberry Rock was the perfect spot for lunch and we watched Wheatears and Red Kites as we ate our sandwiches. The route wound through rough Heather and rock and required careful foot placement in parts but by paying attention to the ground in front of us we were rewarded with close up views of a Green Hairstreak butterfly tucked into the Heather. The trig/high point required a little scramble up onto Manstone Rock but with the sky darkening and wind picking up we didn’t stay long before continuing, leaving the ridge after passing the Devil’s Chair formation. The route back skirted woods and farmland and we saw Willow Warblers and Curlew before picking our way through glorious, vibrant Gorse blossom back to The Bog in time for an exploration of the old mine workings in the area and then on to our Air BNB in Wem, a forty minute drive North.
Saturday was a morning of glorious blue skies as we pulled up in Church Stretton and made our way East towards the tiny valley between Caer Caradoc and Helmeth Hill. The woodland was alive with birdsong and there were Bluebells, Anemones and Wild Garlic flowering beneath the trees, it was a bucolic scene. We were quickly shocked out of our reverie by the brutally steep climb from the valley floor up to Three Fingers Rock where we paused for rest. From this point it was a simple case of following the undulating ridge up to the summit for superb views of the Long Mynd, Lawley and Church Stretton. In Welsh the hill name can be translated as the fort of Caradog and legend associates the hill with the Ancient Briton leader, Caratacus, who may or may not have made a last stand against the Romans at the hill fort atop the peak. A long descent down and then through the Cwms took us up onto the ridge running South West from Willstone Hill and after traversing that it was a simple walk back through the tiny valley and back into Church Stretton for a well deserved Solero.
It would have seemed a little peverse to come walking in Shropshire and yet not visit the Long Mynd itself, probably the most famous bit of upland in the region, so for day three we decided to do just that. The Carding Mill Valley was awash with people, the National Trust car park full and the barking of dogs mingled with the sounds of families out walking as we climbed slowly up Mott’s road towards The Port Way, an ancient track believed to have originated as early as Paleolithic times and already a major route in the thirteenth century. After some lovely views of two of the wild ponies that inhabit the area we continued to the highest point on the plateau at Pole Bank where we could see as far as Cader Idris to the West. Leaving the Jack Wytton way we dropped South with beautiful views of a Stonechat before climbing up to the summit of Grindle where we ate lunch in blissful solitude. Another steep path took us down to the edge of Little Stretton and from there it was a stroll through more woodland and with more wild flowers before we arrived back in Church Stretton.
Shropshire really does have something for everyone in terms of walking and is the perfect location for a family trip. If you are interested in exploring this area please get in touch and we can personalise an itinerary for you.

2 thoughts on “Walks in Shropshire”