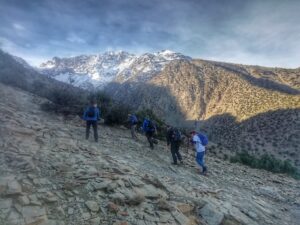 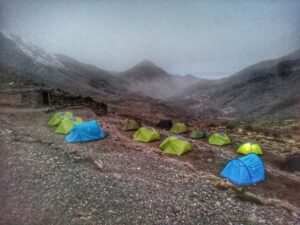 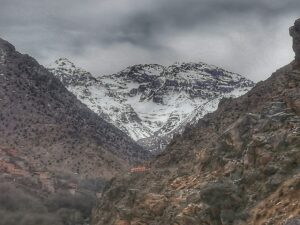 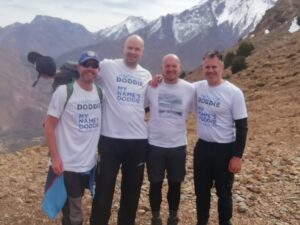 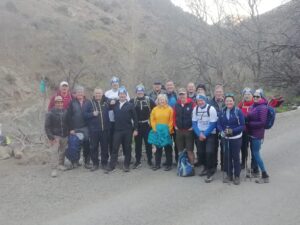 Doddie Weir was a legend as a rugby player, a towering presence in the Scottish second row he was once described by the legendary commentator Bill McLaren as being “On the charge like a mad giraffe”….he was also widely regarded as one of the most likeable men in rugby and so when, after his playing career was over, he was diagnosed with Motor Neurone Disease (MND) it struck a real nerve with both the rugby playing, and wider, community. Since then Doddie has done an incredible job in promoting awareness of MND and the foundation set up in his name, My Name’5 Doddie, has raised enormous amounts to help further research into this cruel and little understood condition. A number of Doddie’s former teammates and rivals including Kenny Logan, Gregor Townsend, Stuart Grimes and Phil Vickery had signed up for a charity fundraiser with Tribal Tracks trekking in the High Atlas in Morocco and in March 2022, two years after it was initially scheduled I was honoured to be one of the leaders on the trek when it eventually happened!
The trek took us 50 kilometres through the High Atlas mountains on the edge of the Toubkal massif, over passes that sat just below the snowline, through Berber villages perched amongst Walnut and Apricot orchards on precipitous hillsides and down through lush valleys where irrigation channels distributed snow melt to farmland and goats and sheep grazed contentedly. We were wonderfully looked after by an incredible in country team of guides, muleteers, cooks and support crew which allowed us to concentrate on the challenge at hand, a challenge that we universally agreed on was a tough one. Imlil is widely regarded as the capital of Moroccan trekking and after a substantial lunch of Couscous, salad and kofta we set off through the edge of the village and soon began a steep climb up a switchbacked path through pine forest towards the pass at Tizi n’Tamatert which sits at a height of 2358 metres above the Imenane Valley. Whilst we had started the afternoon under blue skies by the time we reached the pass the clouds were dropping and we followed the meandering road as it wound it’s way along the edge of the valley through the village of Foussarou to our campsite which we reached in thick cloud just as the daylight was ebbing away. After more delicious food, the camp fire was roaring and Berber songs of welcome were replied to with the lusty strains of “Flower of Scotland” and “Sloop John B”.
After a night cold enough to freeze the water in our wash basins solid, we had an early start but were rewarded with the sight of the moon perched above the snow capped peaks behind us that had been obscured by clouds on our arrival. This was our long day, weighing in at 25km and featuring two lung busting ascents and followed by the same number of knee crunching downs. We passed through the villages of Tacheddirt, Ouanskra, Tamguist and Ikkis following the line of the irrigation channel down into the Imenane Valley. Under blue skies and with stunning views the walking wasn’t easy but it was spectacular and the vista from the top of the Aguersiwal Pass were magnificent. A second night in the tent was spent at Tizi Oussem and around the campfire over beakers of duty free Whiskey, the great and the good of rugby told tall tales well into the night!
The last day started with a long, steep pull out of the village towards the high pass of Tizi Mzzik. It was a steady climb through Juniper forest with more mountain views and little goat tracks that traversed steep scree slopes but the view at the pass made it all worth while as did the freshly squeezed orange juice sold by the optimistic vendor at the top. As we descended the steep path skirting Imlil on our way to Achain Village we met a steady stream of walkers going in the opposite direction suggesting the juice seller was in for a busy day. We made it down into the village and carried on into Marrakech for a celebratory meal that confirmed the quality of the Moroccan cuisine we’d been eating across the whole trek. The challenge raised over £70,000 for the foundation and we were privileged enough to hear from Doddie via the satellite phone on Saturday night, an emotional and moving moment for everyone on the expedition. I am very proud to have been a part of this challenge, feel very lucky to have met some incredible sportsmen and scientists working on MND and to have had support from such a brilliant bunch of local staff. The High Atlas are bewitching and I can’t wait to go back and explore further. Thanks as ever to Tribal Tracks and the My Name’5 Doddie foundation for the work.