Here is a copy of the blog I have just written for Thistle Trekking after completing the first week of the Scottish National Trail with a group of Thistle trekkers. The route runs all the way from Kirk Yetholm to Cape Wrath a distance of over five hundred miles and Thistle will be running two walks a year over three years to complete the epic journey. Week one saw us making our way through the Borders to Edinburgh and was a fantastic experience. If you are interested in joining in a self guided option is available for legs missed, but sign up and join the adventure! 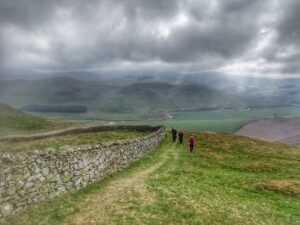 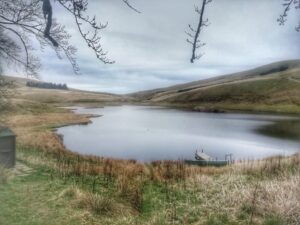 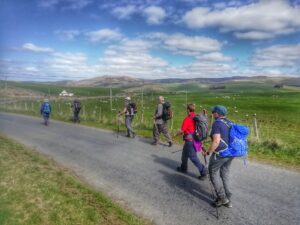 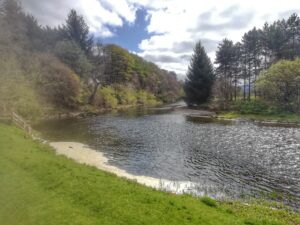 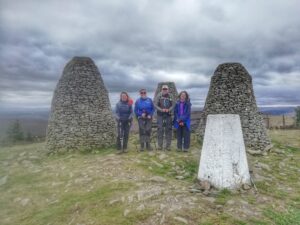 What do you offer the Thistle Trekking regular who has completed all the usual treks that we offer? How about the chance to walk all the way from the English border to Cape Wrath via the Scottish National Trail? This is exactly what Thistle have decided to do over a period of three years running a couple of segments per year and I was lucky enough to be doing the first leg with a fantastic bunch of very excited clients.
Kirk Yetholm is best known for being the terminus of The Pennine Way, but it’s also the start of the SNT. We met the team at “The Border Hotel” the day before our official start and took a warm up walk up to the English border where we got photographs under a moody sky before heading back to the pub for a hearty meal and plenty of excited, nervous chatter about the week ahead.
Day one proper saw us set off from the village green at Kirk Yetholm following the St Cuthbert’s Way whose waymarked white crosses would guide us for the first two days of walking. It wasn’t long before we were leaving the valley and enjoying the long, slow climb up onto the aptly named Wideopen Hill where we had some expansive views. We continued on through Morebattle to meet our support van for lunch at the remains of Cessford Castle which we shared with a flock of sheep and lambs. With impressive views all around including the Waterloo Monument on Peniel Heugh we pressed on eventually making our way through beautiful woodland to the Harestanes Visitor Centre with an impressive seventeen odd miles under our belt!
Day two saw us continuing along the route of St Cuthbert albeit in the opposite direction to the small number of walkers we met en route. Most of them hadn’t heard of the SNT which made us feel a bit smug as we made our way along the course of the old Roman road known as Dere Street. We stopped at Lilliard’s Stone, a memorial to a young woman who died in the Battle of Ancrum Moor, a reminder of the turbulent history of the Borders. A lovely section of walking along the banks of the Tweed took us to lunch in St. Boswells. The afternoon saw more river walking before the final ascent to the pass between the Eildons and then down into Melrose on a path that conveniently ended right in the centre of this bustling border town.
Our longest day took us from Melrose to Traquair and was one of the most memorable. After watching Grey Wagtails on the Tweed we joined the Southern Upland Way which was to be our route for the day. We skirted the edges of Galashiels before following the contours of Hog Hill and dropping down to the bridge at Yair where we watched Dippers and had lunch. Fortified by sandwiches we then climbed the long climb up to the distinctive cairns of the Three Brethren where we had wonderful views of the route back to the Eildon Hills. The rest of the day was glorious walking on tracks and the old drove road which dates back to the thirteenth century. On Brown Knowe we crossed the highest point of our week at 532m and as we dropped off Minch Moor we passed the Cheese Well where traditionally food offerings were left for the faeries. Our day ended as we dropped down into Traquair footsore and weary but after a hugely satisfying day!
On our walk we had already noticed the destruction a Winter of storms had had on the forests of the Borders so we started our fourth day with a slight detour to avoid fallen trees and followed the old railway line track into Peebles making for a relaxing morning of walking. Peebles is a very pleasant town with a high street of independent shops and a friendly feel. We followed the Cross Borders Drove Road once more with it’s waymarker of a slightly sinister looking Cow and continued along rough tracks through some very remote feeling countryside passing abandoned farmhouses before finally dropping down to Romannobridge.
Rommanobridge to Balerno saw us pass through West Linton and the group decided the lure of the Toll House tea room was too strong. After refreshments we climbed out towards Carlops with impressive views all around us. It all felt much wilder again as we lunched at the beautiful North Esk Reservoir before continuing across wild moorland with the cries of Grouse ringing in our ears and as we approached the Bore Stane views towards Edinburgh in the long distance. Our final stage through the Pentland Hills took us down to the suburb of Balerno where we enjoyed a fantastic meal in The Balerno Inn ahead of our last leg.
The last leg is eleven miles of gentle walking along the Water of Leith which was alive with birds and dotted with wild flowers before a long walk in along the Union Canal which flitted between urban and rural vistas and ended with us celebrating the completion of the first leg of this epic adventure by a canalside inn in Ratho! Leg two is coming up later in this year and I hope the group have as much fun as we had on this first challenging but brilliant walk.

2 thoughts on “Scottish National Trail Week One with Thistle Trekking”