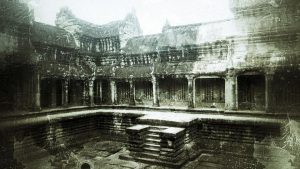 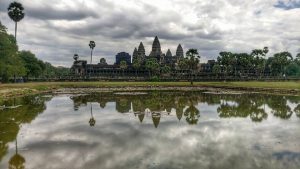 Last year I was lucky enough to take King’s Al Barshar on their expedition to Borneo where we saw Orang Utans, cruised down rivers searching for Probocis Monkeys, learned how to hunt with blowpipes and bamboo traps and worked on a volunteering project building storm drains to protect the local kindergarten from flooding. Well, I must have done something right because this year they asked for me again and this year I got to take the group (including three of the students from last year) on their expedition to Cambodia.
We started our adventure in the capital city of Phnom Penh which had all the hustle, bustle and chaos of a South East Asian capital city. The city is built on the River Mekong and we had a couple of delicious meals with views over the broad stretch of water, my favourite was the Fish Amok, a fragrant, mild curry, but the Water Buffalo with Red Chilli was pretty good too and a new one on me. Our city tour included The Grand Palace which reminded me of the one in Bangkok, the fact that the flag was flying meant the King was in residence but we didn’t get to see him! After that the mood turned more sombre as we visited the SL21 prison, a converted Primary School used by the Pol Pot regime to hold prisoners before they were taken to “The Killing Fields” and murdered. The starkness of the cells and the endless boards of faces of the prisoners were incredibly moving. We followed this with a visit to “The Killing Fields” themselves, an area now looking like little more than parkland but where a large proportion of the million plus victims were taken and beaten to death because bullets were too expensive….the students showed a great deal of maturity in dealing with this difficult and sensitive subject.
After leaving the city we spent three nights at Camp Beng Mealea a six hour drive North. After receiving a Buddhist water blessing the students got down to some volunteering work helping to dig and fill foundations for a workshop that will be used to make water pots for local people in this extremely dry region of the country. During our stay in the camp we also had lessons in Khmer, the local language, visited the Beng Mealea Temple, attended an English language class sponsored by Camps, played a spirited game of football (a diplomatic 1-1 draw) and bought fresh baby coconuts from local vendors. I had my birthday whilst I was in camp and couldn’t think of many calmer, more restful environments to tick off another year!
Our final stop was the tourist mecca of the North, Siem Reap. We had an action packed time there watching Fruit Bats in the park, eating pizza on Pub Street (tasted better than the deep fried Tarantulas in Spider Town) and taking in the frenetic tourist scene. The highlights all came on the last day…..we started early with a zip wire experience in the Teak Forest just outside Ta Prohm (better known as the Tombraider Temple as Angelina Jolie’s Lara Croft film was made in the area). It was great, soaring high above the canopy with magnificent views all around. After lunch we headed into Angkor Wat, one of the great ancient sights of the world. There are some places that are so iconic you fear they might end up disappointing you, Uluru or the Grand Canyon for example, rest assured Angkor Wat doesn’t disappoint. It’s spectacular! I could have spent all day there wandering around the well preserved ruins, watching the tourists and the monks going about their business, but there was more to see….We passed through Bayon before a final tour around Ta Prohm, famous now because the temple is gradually being reclaimed by the jungle…In the evening we visited the fantastic Cambodian Circus “Phare” where the performers come from deprived rural backgrounds and are trained to perform jawdropping acrobatics in a show that pulls no punches in detailing the impact of The Khmer Rouge on the country and the psyche of the people.
All in all it was a fantastic trip. I couldn’t have asked for a better group of students and teachers to travel with. Sunny, our local guide was brilliant and Cambodia is a fascinating country that is fighting hard to put it’s turbulent recent past behind it and create a positive new identity for itself in the Twenty First Century.