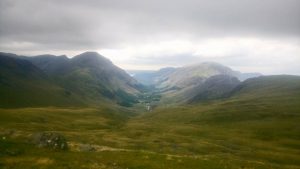 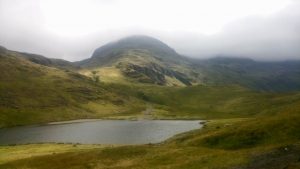 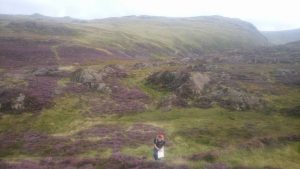 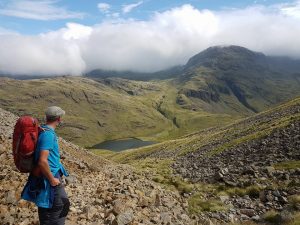 It’s seemed like ages since I had managed to make some time for personal walking and with Nathan, who has long supported Come walk with me UK, preparing for his Mountain Leader assessment my return from Ecuador seemed like a great opportunity to kill two birds with one stone and get some long overdue time in the Lake District.
After meeting up under sunny skies at Seathwaite Farm (allegedly the wettest place in England!) we started the long, steady climb up to Styhead Tarn nestled magnificently in the heart of some of Lakeland’s most iconic peaks. Heading up to Windy Gap, the aptly named pass between Green and Great Gable was a slog on slippery scree but we were soon dropping down the other side and onto the tricky land between Blackbeck and Innominate Tarns, the latter now famous as the resting place of Alfred Wainwright’s ashes! After some navigation practice on the contours we dropped down to Scarth Gap and then continued above Dub’s Quarry and down into Ennerdale. Ennerdale is one of my favourite valleys in the Lakes, it’s hard to reach and so is often quieter even at the height of Summer. It has the feel of Scotland or how I imagine parts of Canada to be with the River Liza cutting it’s way through the forest and the dark brooding hulk of Pillar looming large on the far side of the valley. We made our way down to the Youth Hostel where we were the only guests for the evening which whilst it was pleasant for us doesn’t necessarily bode well for the future of the building. We enjoyed a couple of Pear Ciders with a view of Pillar and watched the young Highland cattle calves at play in the garden.
The heavy overnight rain had left the ground soaked and the river running a little faster as we set off in the morning. The climb up onto Ennerdale Fell was hard going but afforded some incredible views down Ennerdale Water. The Heather was in bloom as we made our way up to the ridge leading us past Steeple and into heavy cloud which gave us occasional glimpses back down towards Wasdale on one side and Ennerdale on the other! We climbed up onto Pillar before carrying on down to Black Sail Pass and then contouring around the sides of Kirk Fell and Great Gable before climbing up onto the Brandreth ridge. From there it was a steep drop down into the valley before following the course of Sourmilk Gill (which looked spectacular) back down to Seathwaite Farm and the end of our journey.
It really is a spectacular part of the world and every time I am there I just find myself thinking that the scenery here is the equal of anywhere in the world. When I was in Ecuador there were a number of places that looked strangely like the Lake District and it felt really good to be back in the heart of the real thing!